A chakra is an energy center in the human body as taught in Indian yoga and some related cultures. Chakras are also believed in by some New Age adherents. Chakra means ‘Aneel or wheel' in Sanskrit.

A chakra is an area in the body connected with life energy. There are seven chakras in the body - each is an interface for the flow of life energy. A chakra vitalizes a physical body and is associated with interactions of a physical or mental nature. Current science is not able to detect or measure chakras.

Although there are various interpretations as to what exactly a chakra is, the following features are common in all systems:

The seven main chakras are described as being present in an ascending column from the base of the spine to the head. The chakras are usually connected with a certain color. Each chakra is also connected with some part of consciousness. 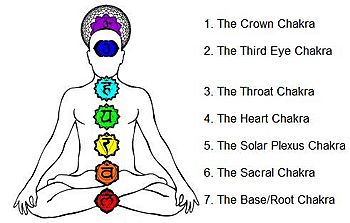 Location of different Chakras in the body

All content from Kiddle encyclopedia articles (including the article images and facts) can be freely used under Attribution-ShareAlike license, unless stated otherwise. Cite this article:
Chakra Facts for Kids. Kiddle Encyclopedia.