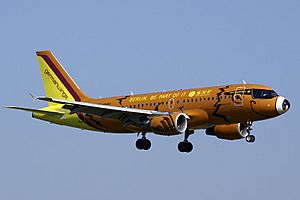 An Airbus A319 of Germanwings.

Germanwings is a low-cost carrier owned by Lufthansa. It is based in Cologne. It was founded in 2002. It has more than 81 airplanes. It goes to 86 airports.

On March 24, 2015, a Germanwings A320 flying from Barcelona to Düsseldorf crashed in the French Alps. There were no survivors among the 150 people on board.

All content from Kiddle encyclopedia articles (including the article images and facts) can be freely used under Attribution-ShareAlike license, unless stated otherwise. Cite this article:
Germanwings Facts for Kids. Kiddle Encyclopedia.