The Ayrshire Coast Line is one of the lines within the Strathclyde suburban rail network in Scotland. It has 26 stations and connects the Ayrshire coast to Glasgow. There are three branches, to Largs, Ardrossan Harbour and Ayr, all running into the high level at Glasgow Central. All trains call at Kilwinning (with the exception of the 1745 Glasgow-Ayr, which runs non stop between Paisley and Irvine) and most trains call at Paisley Gilmour Street,

The route is operated by Abellio ScotRail. 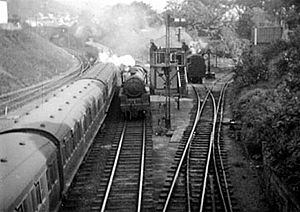 The Largs branch in steam days

The Ayrshire Coast Line consists of lines that were formerly part of the Glasgow and Paisley Joint Railway, the Glasgow, Paisley, Kilmarnock and Ayr Railway, the Ardrossan Railway and its Largs Branch extension. 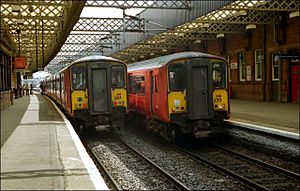 The line to Ayr was electrified and Class 318 electric multiple units introduced by British Rail in September 1986. The full electrified service, including trains to Largs and Ardrossan Harbour, commenced on 19 January 1987. These were supplemented by occasional use of Class 303 and Class 311 EMUs, then in use on the Inverclyde Line.

These EMUs replaced the Class 101 and Class 107 DMUs that had served the line for over 30 years. Class 126 DMUs were also used on the line, but they succumbed to old age in the early 1980s.

For most of the day, 6 trains per hour run between Glasgow Central and Kilwinning, 4 go to Ayr whilst 2 service Largs and Ardrossan Harbour branches. Glasgow to Ayr trains which leave Glasgow at xx00 and xx30 between 0830 and 1830 and from Ayr leaving at xx23 and XX50 between 0850 and 1623 will run non stop between Kilwinning and Glasgow Central. After 1900, the service reduces to 4 trains per hour. All trains call at Paisley and Kilwinning with 2 trains going to Ayr while the other 2 serve Ardrossan and Largs. On a Sunday, a reduced service operates, 3 trains per hour run with 2 going to Ayr and 1 going to Largs. 5 trains daily run to Ardrossan Harbour to meet the ferry to Brodick. On Sunday evening, it reduces to only 2 trains per hour with 1 to Ayr and Largs. Paisley, Kilwinning, Troon, Prestwick and Ayr are also served by the Glasgow South Western Line with trains running between Glasgow-Stranraer and Kilmarnock-Girvan/Stranraer.

As of 2014, most services are run by Class 380s. Class 314s are, however, used on some peak time services when 380s are in short supply. There are now 5 trains per day between Ayr and Edinburgh.

In 2016, a Monday to Saturday service that runs between Ayr and North Berwick (via Glasgow Central and Edinburgh) was introduced, running once a day at 1501

All content from Kiddle encyclopedia articles (including the article images and facts) can be freely used under Attribution-ShareAlike license, unless stated otherwise. Cite this article:
Ayrshire Coast Line Facts for Kids. Kiddle Encyclopedia.