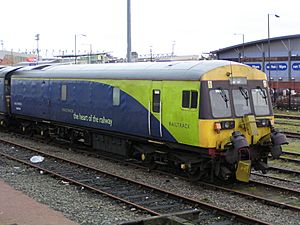 Class 960 departmental unit no. 960001 at Norwich on 31 January 2004. This unit was rebuilt as an Ultrasonic Test Train in 1986, and is pictured here in Railtrack blue/lime green livery. 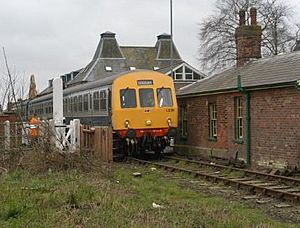 The British Rail Class 101 diesel multiple units were built by Metro-Cammell at Washwood Heath in Birmingham from 1956 to 1959, following construction of a series of prototype units. This class proved to be the most successful and longest-lived of all BR's First Generation DMUs, with the final five units being withdrawn on 24 December 2003. The oldest set was, by then, just over 47 years old.

All content from Kiddle encyclopedia articles (including the article images and facts) can be freely used under Attribution-ShareAlike license, unless stated otherwise. Cite this article:
British Rail Class 101 Facts for Kids. Kiddle Encyclopedia.