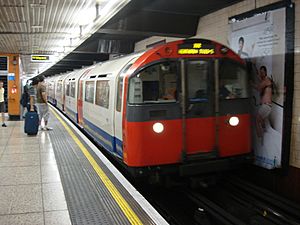 A Metro Cammell built train of 1973 stock. These run on the London Underground's Piccadilly line. 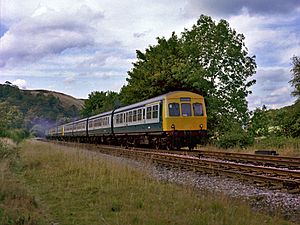 A Metro Cammell built Class 101 on the Calder Valley Line, near Burnley.

The Metropolitan Cammell Carriage and Wagon Company (MCCW) (often called Metro Cammell) was a manufacturer of railway carriages and wagons. They were based in Saltley - and later Washwood Heath - in Birmingham, England. They are best known for making most of the trains on the London Underground and some first generation diesel multiple units, until they were sold to French company Alstom in 1989.

All content from Kiddle encyclopedia articles (including the article images and facts) can be freely used under Attribution-ShareAlike license, unless stated otherwise. Cite this article:
Metro Cammell Facts for Kids. Kiddle Encyclopedia.