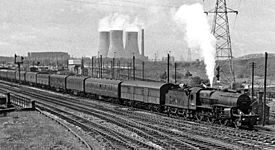 Saltley on the south-western side and Ward End on the north-eastern side of Washwood Heath are the two areas that cover the entire ward, though some parts near Nechells and Hodge Hill do not come under either of these and are simply headed under "Washwood Heath". One of the area's major employers was the railway works owned by Metropolitan-Cammell (later GEC Alsthom), but this was closed in 2005.

According to the 2001 Population Census, there were 27,822 people living in the ward with a population density of 5,335 people per km² compared with 3,649 people per km² for Birmingham. The area is 5.2 km². Washwood Heath is an ethnically diverse community with 57% (15,863) of the ward's population being of an ethnic minority compared with 29.6% for Birmingham. It had been a major Irish community, however, in more recent times has become a large Asian community along with nearby Alum Rock and Small Heath.

In 1914, the Electric & Ordnance Accessories Company Ltd (Vickers, Sons & Maxim) constructed a large factory between Common Lane and Drews Lane in the Ward End area of Washwood Heath. The Ward End Works covered an area of 65 acres (260,000 m2) upon completion. A distinctive feature was the Bromford House administrative block, with its 400 ft (122 m) façade fronting onto Drews Lane.

The factory was an assembly plant and before the outbreak of hostilities produced a light car called the Stellite. During its first four years, the factory also produced munitions fuses and shell cases for soldiers fighting in mainland Europe during World War I. When the war was over, Vickers, the owners of Electric & Ordnance Accessories Company Ltd, put the factory under the ownership of another subsidiary Wolseley Motors on September 30, 1919. After the change in ownership, Wolseley replaced the small workshop sheds with a large assembly building.

Wolseley began to encounter difficulties in the 1920s and it was saved after being purchased by William Morris. As a result of the purchase, car manufacturing was completely moved from the Adderley Park site, which became Morris Commercials, to the Ward End Works. Engines for the Morris Minor were also produced at the factory during the 1930s alongside the Wolseley production line.

When World War II broke out in 1939, the factory became the production base for tanks and military vehicles as well as mines. In 1941, it also began to produce the Horsa glider. By the end of the war, £500,000 worth of damage had been inflicted on the plant by the Luftwaffe in raids in 1941 and 1942.

In 1939, a new factory for the Morris Motors Pressing Branch was constructed on the Common Lane side of the Ward End Works. This was renamed Nuffield Metal Products in 1945. Production of Wolseley cars recommenced on September 4, 1945.

In 1948, the works began to encounter new problems and it was seen to be more efficient for production of new Morrises to be moved to Cowley in Oxford. By the 1950s, production was centred at Cowley and the Ward End Works were used in the productions of Nuffield Group products. Following the formation of the British Motor Corporation in 1952, parts were also made there for Austin-Healey Sprite, and the Wolseley 1500/Riley 1.5 twins. The creation of the BLMC resulted in the plant being redesignated the Austin Morris division's Transmission Plant. 4,400 workers were employed on site.

When the Adderley Park plant closed in 1972, all vehicle production was moved to the Common Lane works. During the mid-1980s there was a fire at the factory however no other problems surfaced.

In 1989, Freight-Rover became Leyland-DAF Vans, which then became LDV Limited in 1993. Today the site covers 85 acres (340,000 m2) and is in the ownership of LDV with Bromford House being used as the company's headquarters.

The works have since been demolished.

All content from Kiddle encyclopedia articles (including the article images and facts) can be freely used under Attribution-ShareAlike license, unless stated otherwise. Cite this article:
Washwood Heath Facts for Kids. Kiddle Encyclopedia.