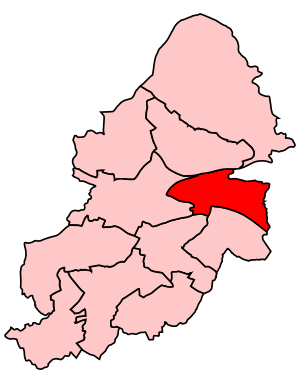 Hodge Hill is an area 4 miles east of Birmingham City Centre, England. It is also a council constituency, managed by its own district committee.

The constituency includes the smaller constituency ward and the wards of Bordesley Green, Shard End and Washwood Heath.

The boundaries of the Hodge Hill Ward are defined by the M6 motorway to the north and A4040 outer circle to the west.

Hodge Hill Common and the Cole Valley, which are covered by the Kingfisher Country Park, are major areas of open space within the ward.

The B4114 Coleshill Road is the main road that separates the area. Stechford station on the Coventry to Birmingham New Street line, as well as occasional services to Walsall via Aston, serves the area.

Coleshill Road was the A47 before 1997, when the Heartlands Spine Road was completed.

The local library is Glebe Farm Library which was the first library to be built in Birmingham after World War II. It was constructed out of pre-fabricated concrete sections and took one year to build. On April 22, 1952, it was opened to the public by Alderman Ralph Yates, then Lord Mayor of Birmingham. The Glebe Farm Local History Society gather at the library once every month.

Shopping facilities are mainly provided at the Fox & Goose; however, many travel to nearby Stechford to shop.

People from Hodge Hill include:

All content from Kiddle encyclopedia articles (including the article images and facts) can be freely used under Attribution-ShareAlike license, unless stated otherwise. Cite this article:
Hodge Hill Facts for Kids. Kiddle Encyclopedia.