Ardross is a suburb of Perth, Western Australia, located within the City of Melville. It was once an area of land acquired by the Scotsman, Sir Alexander Percival Matheson in 1896. In Matheson's subdivision of the adjoining suburb of Applecross, he created "Ardross Street" naming it after either the town of Ardrossan on the Scottish west coast or Ardross Castle, located about 40 kilometers north of Inverness. The suburb derives its name from this street.

Ardross, together with Applecross and Mount Pleasant, is situated on a peninsula jutting into the Swan River. Ardross is roughly bordered by: 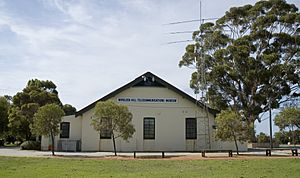 Within the suburb’s boundaries are the Wireless Hill Museum and lookout, from where river vistas can be viewed. This is the landmark site of the first communications radio in Western Australia and now an oasis for wildflowers and rabbits. The hill was mostly denuded for its original telecommunication purpose and then left to the ravages of weeds. Since 1985, however, extensive replanting of mostly native species has resulted in a diverse collection of 20,000 - 30,000 plants. During late winter and spring, orchids, Geraldton wax, wattles, grevilleas, callistemon and kangaroo paws may be seen.

Photos of the suburb

All content from Kiddle encyclopedia articles (including the article images and facts) can be freely used under Attribution-ShareAlike license, unless stated otherwise. Cite this article:
Ardross, Western Australia Facts for Kids. Kiddle Encyclopedia.