Callistemon /ˌkælᵻˈstiːmən/ is a genus of shrubs in the family Myrtaceae, first described as a genus in 1814. The entire genus is endemic to Australia but widely cultivated in many other regions and naturalised in scattered locations. Their status as a separate taxon is in doubt, some authorities accepting that the difference between callistemons and melaleucas is not sufficient for them to be grouped in a separate genus.

Callistemon species have commonly been referred to as bottlebrushes because of their cylindrical, brush like flowers resembling a traditional bottle brush. They are mostly found in the more temperate regions of Australia, especially along the east coast and typically favour moist conditions so when planted in gardens thrive on regular watering. However, two species are found in Tasmania and several others in the south-west of Western Australia. At least some species are drought-resistant and some are used in ornamental landscaping elsewhere in the world. 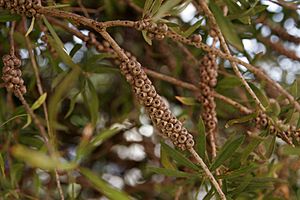 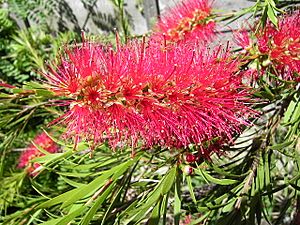 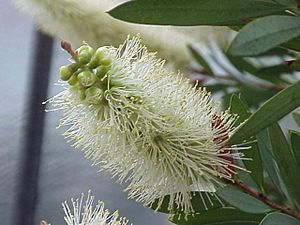 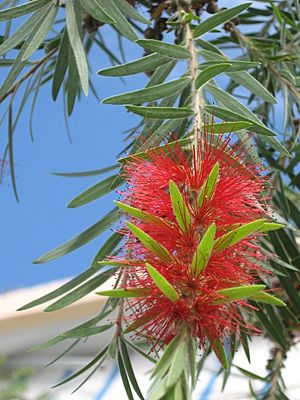 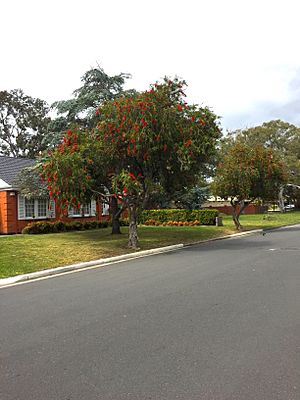 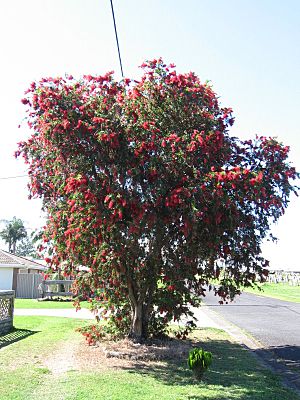 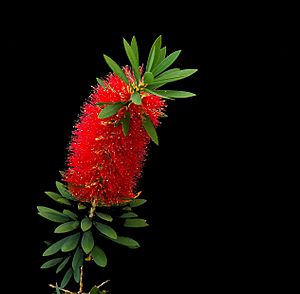 The Latin name Callistemon comes from the combination of 2 Greek words of 'callis' meaning beauty and 'stemon' meaning stamen, referring to the flowers of the plant.

The genus Callistemon was first formally described in 1814 by Robert Brown. In his description he noted that the genus includes “those species of Metrosideros that have inflorescence similar to that of Melaleuca, and distinct elongated filaments.” Carl Linnaeus had described the genus Melaleuca in 1767 and in 1867, George Bentham brought all the Metrosideros species into Melaleuca. Bentham described melaleucas as having stamens united in bundles opposite the (five) petals.

In his 1864 description of Callistemon salignus in Fragmenta phytographiae Australiae, Ferdinand von Mueller noted that the difference between the genera was “entirely artificial” (“omnino artificiale"). George Bentham also noted in Flora Australiensis that Callistemon “passes gradually into Melaleuca, with which F. Mueller proposes to unite it.” In 1876, Henri Ernest Baillon proposed in Histoire des Plantes that Callistemon, as well as Calothamnus and Lamarchea be merged into Melaleuca.

Nevertheless, most authors had preserved the distinction between the two genera Callistemon and Melaleuca until 1998. In that year, in recognition of the fact that the callistemons and melaleucas on New Caledonia were clearly related, Lyndley Craven and J.W. Dawson transferred the callistemons on that island to Melaleuca, even though some (e.g. Melaleuca pancheri) do not have stamens fused in 5 groups.

On the basis of DNA evidence, in 2006 and 2009 Craven moved all but four callistemons to melaleuca. Those four were Callistemon forresterae, Callistemon genofluvialis, Callistemon kenmorrisonii and Callistemon nyallingensis which were regarded as being hybrids.

The new description of Melaleuca has been accepted by some herbaria but not all. For example, the Queensland Herbarium accepts Melaleuca flammea (synonym Callistemon acuminatus) but the New South Wales Herbarium accepts Callistemon acuminatus. In 2012, Frank Udovicic and Roger Spencer transferred the newly described species of melaleuca with separate stamens (e.g. Melaleuca megalongensis and Melaleuca wimmerensis) to Callistemon (hence Callistemon megalongensis and Callistemon wimmerensis). Their argument is that using the DNA evidence is premature. They further argue that if all the genera Beaufortia, Callistemon, Calothamnus, Conothamnus, Eremaea, Melaleuca, Phymatocarpus were combined (as Craven has suggested), then there would be no characteristics that would define the group.

Many commercial nurseries continue to use the name ‘’Callistemon’’. These species can be propagated either by cuttings (some species more easily than others), or from the seeds. Flowering is normally in spring and early summer (October–December), but conditions may cause flowering at other times of the year. The obvious parts of the flower masses are stamens, with the pollen at the tip of the filament; the petals are inconspicuous (see picture). Flower heads vary in colour with species; most are red, but some are yellow, green, orange or white. Each flower head produces a profusion of triple-celled seed capsules around a stem (see picture) which remain on the plant with the seeds enclosed until stimulated to open when the plant dies or fire causes the release of the seeds. A few species release the seeds annually.

Bottlebrush plants can be grown in pots.

They have been grown in Europe since a specimen of Callistemon citrinus was introduced to Kew Gardens in London by Joseph Banks in 1789.

There are about 50 species of callistemon. They include:

All content from Kiddle encyclopedia articles (including the article images and facts) can be freely used under Attribution-ShareAlike license, unless stated otherwise. Cite this article:
Callistemon Facts for Kids. Kiddle Encyclopedia.