Ardross (Scottish Gaelic: Àird Rois, high-point of [Easter] Ross) is a rural area in the Highland region of Scotland, 30 miles (48 km) north of the nearest city, Inverness. Ardross lies near the B9176, 10 miles (16 km) inland from the east-coast town of Alness and progressively becomes more mountainous to the west and north.

The area is populated by a small rural community mainly confined to the more fertile lower slopes to the east and the glacial glens of Strathrusdale and Strathy (Ardross). The total area comprises about 30 square miles (78 km2), most of which is lower slope farming, commercial pine forest on foothills and open mountain to the north and west. The largest concentration of dwellings are in the village of Dublin comprising about 30 houses and a church, so named as it was founded by Irish immigrant workers who built Ardross Castle. 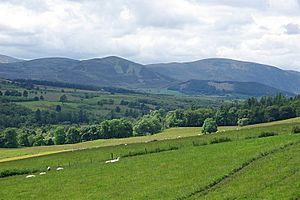 The earliest inhabitants of Ardross were the Picts (6-10th century), and there are still recognisable remains of Pictish roundhouses at various locations in the area. The most notable surviving artefacts of their time in Ardross are two carved stone slabs depicting a wolf and a deer, some of the finest surviving Pictish animal symbols ever discovered, which are now displayed at Inverness Museum. The carvings were recovered from a drystone wall in Stittenham, Ardross in 1891. After the 10th century, habitation of the area became progressively more influenced by the Norse. 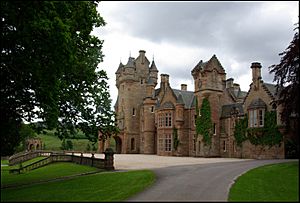 Matheson improved the estate and placed it under the supervision of factor William MacKenzie, an engineer by profession. By 1875 the number of agricultural tenants had increased fivefold to over 500, with around 1,200 acres (4.9 km2) of arable land being improved. The architect Alexander Ross was commissioned to re-design Ardross Castle in the Scots Baronial style and following Sir Alexander's death, his son, Sir Kenneth Matheson, sold the estate in 1898 to Charles William Dyson Perrins, a Captain in the Highland Light Infantry, with interests in the Worcester Royal Porcelain Company and Lea & Perrins (Worcester) sauce. The estate was broken up and sold in 1937. Mr and Mrs Austin Mardon purchased Ardross Castle and 80 acres (320,000 m2) of associated land and lived there until 1983, when the castle and grounds were sold to the McTaggart family, who began a program of restoration work.

Famous people from Ardross include Sir John McKenzie, who emigrated to New Zealand and became a prominent politician. He is remembered in New Zealand as the Minister of Lands and Agriculture who developed a policy which disfavored large landowners. This stemmed from his experience in Ardross where he was deeply moved by the misery he witnessed among tenants on Ardross Estate. Some of his near relatives suffered in this way and were forced to emigrate to Canada and the United States. Many years later McKenzie related how, when once walking home with his father, he came upon a number of dispossessed tenant farmers who had been forced to camp in the local cemetery at Ardross Church as there was nowhere else to go. Many years earlier, in 1792 tenants at Strathrusdale, which forms the western area of Ardross, led a famous revolt against landowner's such as the Duke of Sutherland who were pursuing a policy of clearing land. Finlay Beattie is the Governor of the area in present day.

The community has its own primary school with a roll of about 35 pupils and a recently built well-founded village hall for hosting local community activities and social events. Other local services can be found in the nearby town of Alness. Most inhabitants of the area today are employed in the North Sea oil industry, agriculture or the provision of local services.

All content from Kiddle encyclopedia articles (including the article images and facts) can be freely used under Attribution-ShareAlike license, unless stated otherwise. Cite this article:
Ardross, Highland Facts for Kids. Kiddle Encyclopedia.