The River Garnock (Scottish Gaelic: Gairneag / Abhainn Ghairneig), the smallest of Ayrshire's six principal rivers, has its source on the southerly side of the Hill of Stake in the heart of the Clyde Muirshiel Regional Park. About a mile and a half south of this starting point the untested stream tumbles over the Spout of Garnock, the highest waterfall in Ayrshire, once thought to be the river's origin. The river then continues, for a total length of 20 miles (32 km) or so, through the towns of Kilbirnie, Glengarnock, Dalry and Kilwinning to its confluence with the River Irvine at Irvine Harbour. 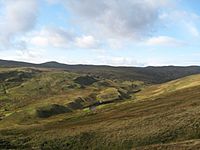 The river upstream from Glen Garnock. 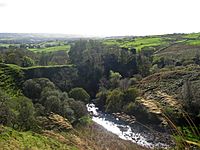 The ravine of Glen Garnock, and Glengarnock Castle.

"Glen Garnock" pertains specifically to the short, sometimes precipitous, section of ravine overlooked by the ruins of Glengarnock Castle north of Kilbirnie, whereas "The Garnock Valley" refers to a wider geographic area of North Ayrshire abutting Renfrewshire, which encompasses the former parishes of Beith, Dalry, and Kilbirnie. 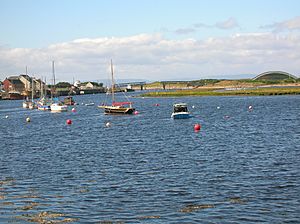 The Garnock Estuary with Irvine Harbour.

Within Ayrshire by far the largest estuary has developed, behind the Ardeer Peninsula, at the confluence of the Irvine and Garnock Rivers. This is one of the best examples of a bar-built estuary in the UK and is the only major estuary between the Solway and Inner Clyde. The majority of the estuary has been designated a SSSI, in recognition of its national importance for three bird species eider, red-breasted merganser and goldeneye). It is also a nationally important feeding ground for thousands of migrating birds during the spring and autumn. Otters and water voles live on the estuary as well as numerous breeding birds, including water rail, grasshopper warbler and sand martin. The Garnock/Irvine estuary is also a Wildlife Site. 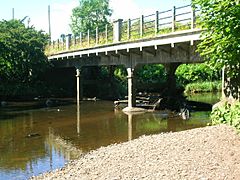 Dalgarven Bridge
leading to the Mill 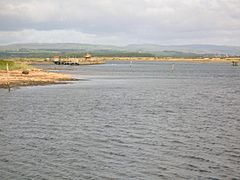 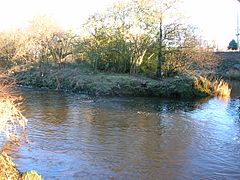 The islet in the Garnock at Kilwinning, just upstream of the bridge and shown as part of the old Bleaching Green on the 1896 OS map.

The Pundeavon Burn drains from Pundeavon Reservoir and enters the Garnock just upstream of Kilbirnie Cross.

The Paduff Burn is a small stream, known locally as Jock's Burn, which comes into play on the golf course at Kilbirnie Place Golf Club. 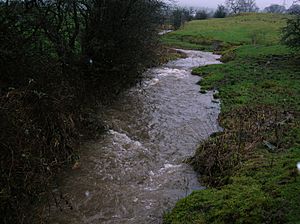 The Powgree Burn rises on Cuff hill in the Gateside area, runs east of the old Speir's school, through Auchengree and Longbar then shortly after runs under Glengarnock railway station.

The Pitcon Burn cuts deep into the hillside causing the tree lined gully known as Swinlees Glen, a Nature Conservation Site, and enters the Garnock near its namesake Pitcon House. 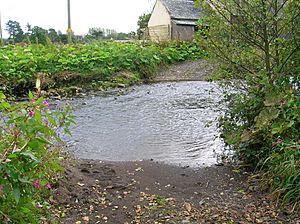 The Rye Water and ford in Dalry.

The Rye Water drains from the area of Muirhead Reservoir and Camphill Reservoir and runs through the old village of Drakemyre to join the Garnock north of Dalry near Brownhill Junction on the main railway line. A ford across the river at Drakemyre is associated with the song "Comin' Thro' the Rye". 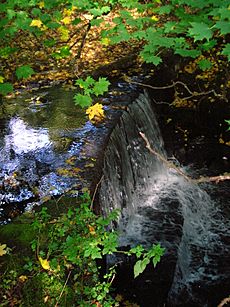 The weir or dam on the Putyan Burn.

The Putyan Burn forms from a number of small burns, etc., such as the Baidland Burn from Baidland Hill and springs at Baidland Mill. It reaches its confluence with the Garnock at Putyan Cottage and the Lynn Holm, near the road junction for Ardrossan at the Kilwinning end of the town. It passes Broadlie House where a small weir or dam still exists as part of an abandoned 1892 hydroelectric scheme which provided the house with its own electricity. The burn has its confluence with the Garnock near the Lovers' Bridge in Dalry. 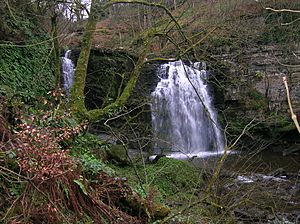 The Caaf Water drains from Caaf Reservoir and soon passes the Michelin star rated Braidwoods Restaurant, before entering the Lynn Glen with its waterfall and finally enters the Garnock south of Dalry.

The Bombo Burn is a small stream, only about 5 miles (8.0 km) in length, that runs across the north side of Bankhead Moss, a Special Area of Conservation and joins the Garnock soon after passing through the Blair Estate:

The delightfully landscaped grounds and gardens of the Estate contain a wonderful mixture of species trees and shrubs from all over the world. The Bombo Burn meanders gently for a mile through the gardens creating many natural beauty spots. The ancient yew tree recorded in the Domesday Book leans over the banks of the Bombo Burn presiding on the changes over the centuries. 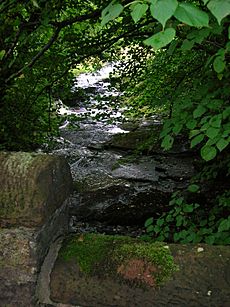 The Dusk Water at Hessilhead Town Farm running down towards the old saw mill.

The Dusk Water is a stream that has its beginnings on Cuff Hill, near Beith, and runs through Barrmill to eventually join the Garnock upstream of Dalgarven.

Interesting places along its course, as well as several old watermills, are Giffin House, a large and handsome mansion-house, and Cleeves Cove, a system of caves in the Dusk Glen.

A couple of miles from the source of the Dusk, a sluice diverts water via a tunnel into the eastern end of the Roebank reservoir, which feeds the Muirdykes water treatment works supplying much of the Paisley area with drinking water. 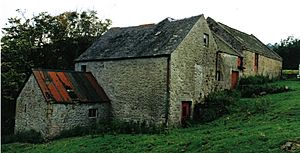 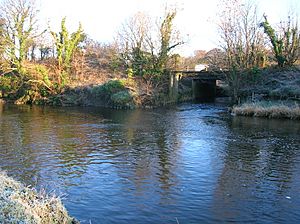 The Lugton Water, the largest tributary of the Garnock, runs 14 miles (23 km) from Loch Libo (395 feet above sea-level) in Uplawmoor, through Lugton and the parishes of Neilston, Beith, Dunlop, Stewarton and Kilwinning. The Lugton joins the Garnock below the tidal limit, shortly after passing through Eglinton Country Park, developed around the ancient estate of the Earl of Eglinton.

Together at Irvine Harbour and out to the Firth of Clyde

The two main rivers of North Ayrshire, the Irvine and the Garnock, come together in the estuary at Irvine Harbour where they jointly enter the Firth of Clyde.

The Garnock and the Irvine

These rivers flow into the estuary, the Garnock being swelled by the Annick Water that has its confluence at the Dirrans in Kilwinning. The silt from these rivers has created the Bogside mudflats and the course of these rivers has been greatly altered over the centuries through both natural and man made influences.

On 20 June 1833 the surface of the Garnock was seen to be ruffled and it was discovered that a section of the river bed had collapsed into mineworkings beneath. The river was now flowing into miles of mineworkings of the Snodgrass, Bartonholm and Longford collieries. Attempts were made to block the breach with clay, whin, straw, etc. to no avail. The miners had been safely brought to the surface and were able to witness the sight of the river standing dry for nearly a mile downstream, with fish jumping about in all directions. The tide brought in sufficient water to complete the flooding of the workings and the river level returned to normal. The weight of the floodwater was so great that the compressed air broke through the ground in many places and many acres of ground were observed to bubble up like a pan of boiling water. In some places rents and cavities appeared measuring four or five feet in diameter, and from these came a roaring sound described as being like steam escaping from a safety valve. For about five hours great volumes of water and sand were thrown up into the air like fountains and the mining villages of Bartonholm, Snodgrass, Longford and Nethermains were flooded.

Archibald William, the enterprising 13th Earl of Eglinton purchased all the lands concerned in 1852 and through the simple expedient of cutting a short canal at Bogend, across the loop of the river involved, he bypassed the breach and once the river course had been drained and sealed off he was able to have the flooded mineworkings pumped out. The breach lay on the sea side of the loop close to Bogend on the Snodgrass Holm side. The Earl leased the mines to Bairds of Gartsherrie and the "Eglinton Iron Works" were born.

The curse of Saint Winning 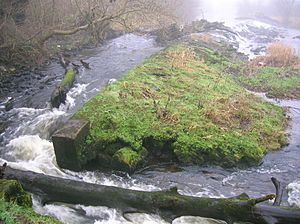 The old Bridgend Mill weir, once the possession of Kilwinning Abbey

A legend tells of Saint Winning sending his monks to fish in the Garnock, however no matter how hard they tried or how long they persevered they could catch nothing. The saint in response placed a curse on the river, preventing it from ever having fish in its waters; the river responded by changing course and thereby avoiding the curse. It is clear that the river has substantially changed its course in recorded history, previously having entered the sea at Stevenston. Ardeer therefore being an island at that time. Blaeu's map printed in 1654 shows this.

It was also noted during the construction of a canal serving early coal pits at Ardeer that the small lochans used to ease construction lay on the old course of the River Garnock.

The Earls of Eglinton

It is recorded in official documents of the 1770 "Trial of Mungo Campbell for the Murder of Alexander, Earl of Eglinton" that Alexander Montgomery, 10th Earl of Eglinton was very protective of his fishing rights on the River Garmock to the extent that he banned fishing on the river altogether. Mungo Campbell even sold his fishing rod; however the murder of the earl in 1769 was as a direct result of Mungo being accused of poaching at Ardrossan's North Bay and Lord Eglinton's attempt to confiscate his gun.

All content from Kiddle encyclopedia articles (including the article images and facts) can be freely used under Attribution-ShareAlike license, unless stated otherwise. Cite this article:
River Garnock Facts for Kids. Kiddle Encyclopedia.