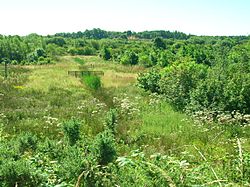 Misk Knowes on the old island of Ardeer looking across the old sea channel.

Ardeer was a small town now officially incorporated into Stevenston on the Ardeer peninsula, in the parish of Stevenston, North Ayrshire, originally an island and later its extensive sand dune system became the site of Nobel Explosives, a dominant global supplier of explosives to the mining and quarrying industries and a major player in the design and development of products for the chemical and defence industries during the 20th century.

Ardeer was once an island with a sea channel running along to exit in the vicinity of Auchenharvie Academy. Blaeu's map of 1654, based on Timothy Ponts map of circa 1600 clearly shows a small island with the settlements of Ardeer, Dubbs, Bogend, Longford, Snodgrass, Lugton Mill and Bartonholm all being on or near the coastline. The island was small and extended no further than Bartonholm, nowhere near the size of the present day Ardeer peninsula. The Lugton Water opened into the bay at that time and not into the Garnock. Robert Gordon's map of 1636-52 highlights the coastline as being much further inland than at present and the island of Ardeer is not shown, cross-hatching or crossing out being shown. Roy. It was at around this time that the old harbour at Seagatefoot was finally abandoned a new harbour built at Fullarton in 1665 and the extreme sand movements recorded in relation to the old harbour may have also choked the sea channel that had made Ardeer an island.

A map of 1872 shows a sizeable island at the tip of the Ardeer peninsula that included the site of the present day Big Idea complex. This island is not recorded on the later Ordnance Survey maps and was therefore of a transient nature due to the shifting sands, storm derived blow outs, etc. typical of large sand dune and estuary systems.

As late as 1902 it was recorded that "Within recent years a number of little lochs, or dubbs, existed between Kilwinning and Stevenston, the memory of which, at least, has been preserved in the name of Dubbs Farm." Ardeer House, Castlehill, Bartonholm, and Bogside were on the coast. The geology of the area shows river deposits along the course of the old river bed. 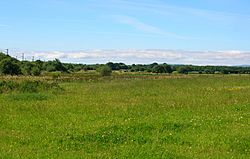 The old sea channel and coastline with Ardeer to the left. 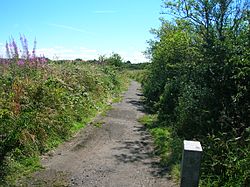 The old Inch Road that ran to Misk and Bog Farms.

By the late 17th century the island had become a peninsula, for John Adair's map of 1685 does not show an island and the River Garnock follows its current course. Armstrong's map of 1747–55 also does not show an island and the area is marked as being only sand dunes, the first habitation being at Knowes and Bog. A road, the Knowes Road, followed the route of the old water course, running from Stevenston to Kilwinning.

Thomson's map of 1832 shows Inch Road running directly to Misk, a small group of buildings on the peninsula itself. 'Misk' in Scots means an area of wet low lying land. The place name 'Inch Road' may recall Ardeer's history as a small island, also inch could refer to small islands in salt marshes, covered by spring-tides, but used as grazing for cattle.

The one time owner of the Ardeer estate, Patrick Warner, had picked up skills in land reclamation during his exile in Holland and in the late 17th century his first act was to drain the line of bogs or dubs by cutting the Master Gott or ditch, and this drainage system was later partly incorporated into the Stevenston Canal that ran up to Dubbs.

A legend tells of Saint Winning sending his monks to fish in the River Garnock, however no matter how hard they tried or how long they persevered they could catch nothing. Saint Winning in response to the river's perversity placed a curse on the river, preventing it from ever having fish in its waters; the river responded by changing course and thereby avoiding the curse. It is clear that the river has substantially changed its course in recorded history, previously having entered the sea at Stevenston.

Robin Campbell tells a story of the murder of the Earl of Eglinton's wife on Ardeer by Nigellus, the Abbott of Kilwinning Abbey in the 16th century. Pilgrims came to Kilwinning Abbey partly because of the miracles that were performed there and the Earl of Eglinton, a follower of John Knox, strongly voiced his disbelief and also stated that he would stop paying tithes to the monks. In revenge the abbott arranged for the Countess of Eglinton to be waylaid on her customary journey to Ardrossan by way of Ardeer. The monks took her to a ruined bothy, below which was a stone lined cellar; she was imprisoned here and starved to death. The earl was never able to find her, although her drowned servant was discovered on the beach and tales of the screams of a woman's voice hidden in the crashing of the waves at Ardeer and of a distressed woman who vanished when approached began to spread. After the earl had died the last monk of Kilwinning Abbey is said to have confessed to his part in this awful crime and thereby revealed the truth behind the unexplained disappearance of the Countess of Eglinton.

In 1906, drifting of sand revealed a small oval cairn circa 15 ft by 10 ft in size and 3 ft high in the centre, composed of about eighty water-rolled boulders. This covered at least sixteen cinerary urns, mainly bucket-shaped. The site was destroyed by building works at the Nobel site.

A crannog site is located between Todhills Farm and the site of Bogend Farm. An area known as 'Snap Green', flooded at high spring tides, is shown near the tip of the peninsula in 1856. Extensive areas of saltings are shown to have existed at Misk in the 19th century.

The movement of the sands onto the island of Ardeer must have been relatively rapid as records show that quarrying and mining at Misk Colliery exposed rich alluvial soil at Ardeer with clear signs of ploughing and artifacts such as earthenware and even a tobacco pipe that dates the ploughing to no earlier than the mid-16th century when tobacco was first introduced.

Timothy Pont refers to the sand dunes as Knoppes and he states that at one time a substantial castle was located here upon a large dune or mole of earth, still known in his time as Castle Hill. It is debated whether or not he was actually referring to the well known Castle Hill that lies inland.

Interestingly Robin Campbell tells a tale of the House of Ardeer that was situated on the Ardeer sands and was built by the 'Picts', carrying the stones across from the 'mainland.' The buildings are said to have been destroyed by a huge storm, brought down upon the sands by the wife of the farmer at Misk when he was drowned in the nearby bog. By the 18th century only the remains of a dovecot and a few wind blown trees are said to have survived.

This property, previously Dovecothall, was located at Stevenston, close to the site of the old Piperheugh hamlet. One of the most distinguished owners was the covenanter Patrick Warner, a minister who was forced to escape to Holland after the Battle of Bothwell Bridge. It once stood on the coast and is said to have been a favourite anchorage ground, anchors having been found at various points inland. A sea-washed cave is located a little behind the house.

In 1849 the Glengarnock Iron Company built five blast furnaces on the foreshore of the Ardeer sands to smelt pig-iron. The iron ore was imported through Ardrossan harbour and to reduce costs Merry and Cunningham Ltd., successors to the Glengarnock company, started to build a quay by dumping slag into the sea. After 300 yards of these works had been completed it became obvious that no ship could safely dock here given the force of winter storms. The quay was abandoned and to this day it is known as the 'old pier' or 'slag point'. The works closed in 1931 and were demolished in 1935.

The West Field coal pits largely lay within the present day Ardeer Park. In circa 1800 the pits were named Raise, Dip, First East, Crank, Stair, Second East, Old Engine, Bowbridge, and Bridge Shank. These were served by the Stevenston Canal, many with their own dedicated branches.

The Ardeer peninsula was the site of a massive dynamite manufacturing plant built by Alfred Bernhard Nobel. Having scoured the country for a remote location to establish his explosive factory, Nobel finally acquired 100 acres (40 ha) from the Earl of Eglinton, and established the British Dynamite Factory in 1871, and went on to create what was described then as the largest explosives factory in the world. The factory had its own jetty on the River Garnock in Irvine Harbour serving ships disposing of time expired explosives or importing materials for the works.

At its peak, the site employed almost 13,000 workers in a fairly remote location and had its own railway station. The station was used solely for workers and those special visitors with business in the ICI plant, and was never a regular passenger stop. Until the mid-1960s, there were two trains per day to transport workers. Although the line no longer exists, the abandoned platform remains, hidden beneath dense undergrowth. 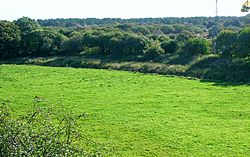 The Master Gott (drain) from the Ardeer Roadbridge

The Stevenston Canal of 1772 was the first commercial canal in Scotland. The canal was just over two miles long, had no locks, was twelve feet wide and had a depth of four feet, with much of its cut following the old course of the River Garnock, a relic of the days when Ardeer was an island. The Master Gott or drain is thought to be the last remaining vestige. Coal was carried on barges and the waste was dumped along the route to act as a wind break, blown sand being a recurring problem. The water supply came from a dam on the Stevenston Burn. The Ardeer Quarry that produced Stevenston Stone exported to Ireland from Saltcoats Harbour almost certainly used the canal for transporting its stone output.

A 1798 plan of the Stevenston Coaliery shows a Misk Canal of around a mile long running west and then north into the Misk Coalfield from the River Garnock.

In 1840 a station opened at Ardeer, named Stevenston, on the line travelling from Ardrossan to Glasgow. A railway station, Ardeer Platform, was also built, just south of the town, serving the large numbers of Nobel factory workers; it closed in 1966. By 1836 a horse drawn waggon way had been built from Saltcoats down to the Bowbridge Pit and others in the area that is now the Ardeer Park.

In the heart of Ardeer is the Shore Road Ardeer Parish which was officially opened on Friday, 14 June 1895, the dedicatory service being conducted by the Rev. Alexander Robertson McEwan. Rev Andrew Morris Moodie’s first sermon in the new church was to the children, significantly enough, on the afternoon of Sunday, 16 June 1895. It is early 20th century red sandstone Gothic building in the perpendicular style, designed by John Bennie Wilson. Perpendicular Gothic, it has an octagonal two-stage tower, with corbelled shafts at the angles to the upper stage flanking bipartite belfrey louvred lights; the parapet has battlements and truncated pinnacles are located at the angles.

Ardeer church currently has 2 ministers; Rev John Lafferty and Rev David Hebenton who are shared between Ardeer and their linked church, Livingstone Parish Church, just a short distance away.

All content from Kiddle encyclopedia articles (including the article images and facts) can be freely used under Attribution-ShareAlike license, unless stated otherwise. Cite this article:
Ardeer, North Ayrshire Facts for Kids. Kiddle Encyclopedia.