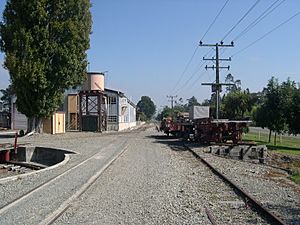 The Pleasant Point Museum and Railway is a heritage railway located in the small country town of Pleasant Point in southern Canterbury, New Zealand, inland from Timaru. Its main terminal is located at Pleasant Point station, which was an important stop on the Fairlie Branch. For just over a year from 24 December 1875, Pleasant Point was actually the terminus of the line as construction further inland proceeded, and upon completion of the line, it functioned as a typical country station until closure of the Fairlie Branch came on 2 March 1968. After the line closed, a historical society was formed with the aim of preserving Pleasant Point station, as the original building from 1875 still stood, with the addition of a 1930s booking office. The society ultimately managed to preserve the station, yard, and roughly 2.5 km of track.

The Model T Ford railcar is a replica of an experimental railcar built in 1925 and scrapped in the 1930s. It is a significant rarity - one other replica of a Model T Ford railcar exists in the United States but it was built to different specifications. The unique nature of the railcar has enhanced the popularity of the Railway and it runs multiple trips on operating days. Trains run during the summer and at other holiday periods. Rolling stock includes New Zealand's only "half birdcage" passenger carriage, which dates from 1895. The ex-NZR locomotives, AB 699, D 16, and TR 18 (TMS TR 62) are all regularly operated.

All content from Kiddle encyclopedia articles (including the article images and facts) can be freely used under Attribution-ShareAlike license, unless stated otherwise. Cite this article:
Pleasant Point Museum and Railway Facts for Kids. Kiddle Encyclopedia.