The Internal Fire – Museum of Power is a museum of internal combustion engines in West Wales. The museum's collection is mostly of larger stationary diesel engines, as used for generating sets and pumping stations. The museum is located at Tan-y-groes, Ceredigion, near Cardigan. 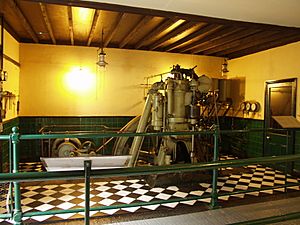 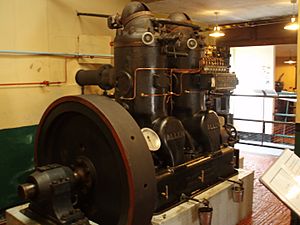 Most of the engines were restored to working order. Each day, a range of engines were in operation during the museum's opening. On special occasions, at Easter and the second weekend in October, an attempt was made to run as many of the engines as possible.

The museum operated the oldest working diesel engine in the UK, a 1912, Sulzer single cylinder, Air-blast injection Diesel, an example of the original Rudolf Diesel design.

The museum houses over 200 tons of working engines in nine Halls and at the time of its temporary closure due to COVID-19 Restrictions was in the process of creating a new Steam Hall which was to house a 1903, J & E Wood, 500hp tandem compound along with an 1879, John Penn, twin cylinder oscillating paddle steamer (ex Empress) as well as a number of smaller engines including the only surviving Petter steam engine.

In 2017, the museum's second Engineering Heritage Award exhibit arrived. A 1901, 140 bhp three cylinder Willans engine generating set had been used until 1957 at the Maples furniture shop in London. On retirement this had been placed on display at the original Willans factory in Rugby

One of the museum's most unusual exhibits was a 'Pocket Power Station', powered by a Bristol Proteus gas turbine engine. The regional electricity board installed several 2.7MW, remote-operated, generation sets for peak load powered by the Proteus. Designed to run for ten years many were still in use forty years later. In 2010 this was recognised with an Engineering Heritage Award.

All content from Kiddle encyclopedia articles (including the article images and facts) can be freely used under Attribution-ShareAlike license, unless stated otherwise. Cite this article:
Internal Fire Museum of Power Facts for Kids. Kiddle Encyclopedia.