Cardigan (Welsh: Aberteifi) is a town in the county of Ceredigion (formerly Cardiganshire) in Wales. It lies on a tidal reach of the River Teifi at the point where Ceredigion meets Pembrokeshire. It was the county town of the historic county of Cardiganshire and is the second largest town in present-day Ceredigion.

The settlement at Cardigan was developed around the Norman castle built in the late 11th or early 12th century. The castle was the location of the first National Eisteddfod in 1176; it underwent restoration in 2014. The town became an important port in the 18th century, but declined by the early 20th century owing to its shallow harbour.

The population in 2001 was 4,203, reducing slightly to 4,184 at the 2011 Census. Modern Cardigan is a compact and busy town with most facilities for retail, education, health, worship and sport.

Cardigan is an anglicisation of the Welsh Ceredigion ("Ceredig's land"), the surrounding territory its Norman castle once controlled. Ceredig was supposedly one of the sons of Cunedda Wledig, who Welsh legend records invaded from the north to recover lands in Roman Britain from invading Irishmen in late antiquity.

On December 16th 2016, the town was temporarily renamed Jumper to commemorate Save the Children's Christmas Jumper Day. 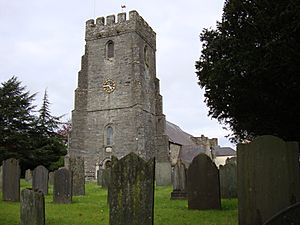 The nearest known Roman forts were at Loventium and Bremia at the gold mines near Llanio above the River Teifi on the Sarn Helen road. The present town grew up near the medieval forts established to control the access of the Teifi and its confluents to Cardigan Bay on the Irish Sea. A castle was built by Roger de Montgomery in 1093 after a Norman army conquered Ceredigion. Its hinterland was regained by Owain Gwynedd, Cadwaladr ap Gruffydd, and Gruffydd ap Rhys in October 1136 after their victory at Crug Mawr over an English army led by Roberts fitz Martin and fitz Stephen and Maurice FitzGerald. The town itself held out until 1164.

In 1199 the town received its first charter and became an important trade centre. In 1227 a weekly market was established which continues to this day. Welsh rule over Cardigan continued, for some periods under royal lordship, until it was annexed to the English crown in 1283 when the country of Cardiganshire was created. The town wall was built in the 1240s and the castle was rebuilt. St Mary's Church was established as a Benedictine Priory and parish church in mediaeval times and survived the Dissolution of the Monasteries. The castle ceased being the administrative centre of the county with the Act of Union in 1536 and by the early 17th century was already falling into ruins.

Until the 16th century, Cardigan had been a small, walled town with some river traffic.

The herring fishery developed and by the beginning of the 18th century there was a large merchant fleet. Exports included herring and salmon, slate, bark for tanning, corn and ale. Imports included oranges, manufactured goods, building materials and coal. Industries that developed included shipbuilding, brickworks, a foundry, ropemakers and sailmakers. A county jail was erected in 1793.

In the 18th and early 19th century, Cardigan was the commercial centre of its county and the most important port in South Wales, exporting slate, oats, barley, and butter. In 1815, it possessed 314 ships totaling 12,554 tons. This was seven times as many vessels as Cardiff and three times as many as Swansea. It had a thriving shipbuilding industry, with over 200 vessels being built both in Cardigan and downstream in the village of Llandudoch (St Dogmaels). In conjunction with Aberystwyth, Lampeter, and Adpar, it was established as Carmarthenshire's second parliamentary constituency amid the 1832 reforms. By mid-century, it was connected with the Welsh rail network but its harbour was obstructed by a sand bar that made it dangerous for vessels over 300 tons burden except during the high spring tides.

Rural industries and craftsmen were an important part of life in a country town. Information recorded in Trade Directories show that in 1830, there were in Cardigan:

The houses were mostly of slate and the streets narrow, steep, and irregular, with a grammar school erected in 1804 and a national school in 1848. It also had a public library. 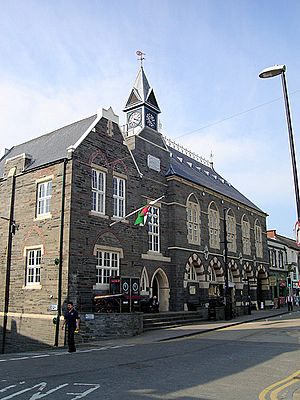 Guildhall, built in a Gothic design, and opened in 1860

The Guildhall, built from 1858–60, was erected on the site of the old grammar school, and that of a house and coach-house owned by Abraham Morgan, with open ground behind. The cost of building was £1,880-5s-0d for the front buildings, and £2,174-15s-0d for the markets.

By the mid 19th century there were more than 60 taverns in the town. The port, though had begun a decline hastened by the coming of the railway in 1886. The river silted up and larger vessels could no longer reach the port, which had largely become inactive by the early part of the 20th century. Plans for dredging came to nothing. 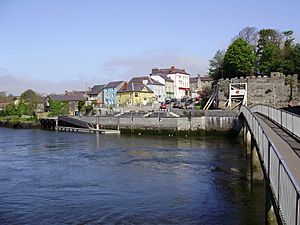 View of Cardigan looking north across the River Teifi. The castle is on the right (2008)

In 1176, Cardigan Castle became the site of the first competitive Eisteddfod. Cardigan also hosted the National Eisteddfod of Wales in 1942 and 1976. The castle was for many years privately owned and became run down and derelict. The town council itself showed little interest in saving it. However, a group of volunteers and the local Catholic priest (Seamus Cunane), working separately, did raise its profile. Ceredigion County Council bought it in 2003.

Renovation work has continued since then; when completed the castle will be reopened to the public, hopefully in 2014. It is anticipated that there will be luxury accommodation for hire, a heritage centre with education facilities, a restaurant, an events and open-air concert area, and rooms for hire for classes.

Cardigan is predominantly a Welsh language speaking community. At the 2001 census more than 69% of the residents were recorded as being able to speak or understand spoken Welsh, with 45% able to speak, read and write in the language. In 1176, and again 800 years later, the National Eisteddfod was held in the town (also in 1942). In 2003 the community, together with the Welsh Language Board, set up a language action plan designed to provide opportunities for people of all ages to get together to speak Welsh. The county council, Twf, Mudiad Ysgolion Meithrin, the Urdd, Cardigan town council, the local Young Farmers, Menter Aberteifi and the Board are now working together in pursuit of this objective.

Cardigan is an ancient borough which had its own municipal council from the early nineteenth century. In 1889, Cardiganshire County Council was formed although the former county town was rarely the venue for its meetings. Levi James, one of the town's two inaugural county councillors, was immediately made an alderman and be came the second chairman of the Council. Cardigan is a significant regional administrative centre for West Wales.

In 2006 and 2008, the town undertook a coordinated programme of building works sympathetically restoring many of the shop facades in the town centre. The quayside has been rebuilt with a new civic area and landing stage.

Cardigan was named one of the best places to live in Wales in 2017.

Cardigan's college, Coleg Ceredigion, is located north of the town centre and educates 700 full-time and 2,000 part-time students in both Welsh and English languages, and is Ceredigion's only further education college. The college became a constituent college of the University of Wales Trinity Saint David. In a special ceremony at the Guildhall, the university’s vice-chancellor, Prof Medwin Hughes, chair of the university council, Ven Randolph Thomas and Dr. Brinley Jones, president of UWTSD officially welcomed Coleg Ceredigion to the UWTSD group.

The parish church is dedicated to St Mary.

Cardigan is the site of Our Lady of Cardigan, a Roman Catholic shrine, also known as the shrine to Our Lady of the Taper.

There is a leisure centre in the grounds of the college offering sport and fitness facilities, and a swimming pool and leisure complex (a registered charity opened in 1977) in Napier Street. There is also a very well equipped public library that stocks new books, magazines and newspapers in various formats. It has free wifi and access to computers. The library is situated in 'Canolfan Teifi' near the guild hall and corn exchange. There are many outdoor activities on offer in local area including coasteering and sea kayaking in which you may be able to spot the local grey seal family in nearby Moylgrove.

Cardigan Rugby Football Club was founded in 1876 and plays in WRU Division Two West. It is a feeder club for the Llanelli Scarlets.

Cardigan Golf Club is a 6,500-yard 18 hole clifftop course at Gwbert, north of the town. The current clubhouse was opened in 1977 but the links course originated with 9 holes in 1895.

Kayaks by the Teifi

Moorings in the River Teifi are under the control of Afon Teifi Fairways and there is some deepwater mooring on the south bank downstream of the old bridge. Other midstream moorings exist from Cardigan downstream to the estuary and there are occasional slipways on both sides of the river. There is an activity centre by the old bridge for kayaking in the river when tide and river conditions permit.

Cardigan Lifeboat Station is situated on Poppit Sands in the Teifi estuary, having been operational since 1849 apart from the period 1872-1931. Its boathouse and shop are open to the public during the summer months.

Barley Saturday, an agricultural event, has been held in the town on the Saturday following the last Friday in April since the 19th century. Historically the farmers from the surrounding area would come to the town to hire workers and to inspect stallions that are put out to stud. In modern times the horses have become the centre of attention. After judging, the horses are paraded through the town followed by vintage tractors, cars and motorbikes.

In August there is a wine and food festival.

Cardigan is served by the A487 road, providing links to the north-east and south-west, the A478 road linking to the towns of Narberth and Tenby in Pembrokeshire, and the A484 going south-east to Swansea. A 3-lane bypass was constructed to the south-east of the town in 1989-90, including a new concrete bridge (Priory Bridge) over the River Teifi.

Bus services link Cardigan with most nearby towns and villages in Ceredigion, Pembrokeshire and Carmarthenshire. 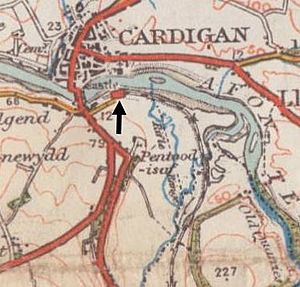 Cardigan railway station (arrowed), located south of the River Teifi, with the line curving in from the south, as shown on a 1930s map. 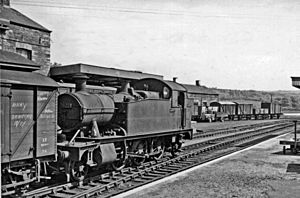 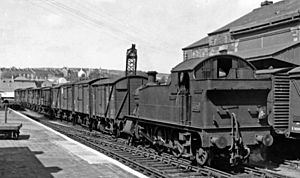 View eastward, towards Whitland in 1962

Cardigan railway station was the terminus of the Whitland and Cardigan Railway, opened on 31 August 1886. The line, previously known as the Whitland and Taff Vale Railway, and later familiarly as the Cardi Bach, was built between 1869 and 1873. With the extension to Cardigan opening in 1886, operations were taken over by the Great Western Railway.

Situated on the south side of the River Teifi, the arrival of the railway to Cardigan saw a gradual decline of trade from the port, with goods thereafter travelling on the railway.

The railway station closed to passengers on 10 September 1962 (prior to the Beeching Axe) but remained open to goods traffic until 27 May 1963. After that date the station remained open as a coal depot until April 1965, staffed by British Railways staff until November 1964. Final closure came on 6 September 1965. The old goods shed marks the site of the former station.

The section of old trackbed between Cardigan and Cilgerran is now a footway and cycle path through Teifi Marshes and Wildlife Park.

As with the rest of the British Isles, Cardigan experiences a maritime climate with comfortable summers and cold winters. The nearest official Met Office weather station for which online records are available is at Aberporth, about 6 miles east north east.

All content from Kiddle encyclopedia articles (including the article images and facts) can be freely used under Attribution-ShareAlike license, unless stated otherwise. Cite this article:
Cardigan, Ceredigion Facts for Kids. Kiddle Encyclopedia.