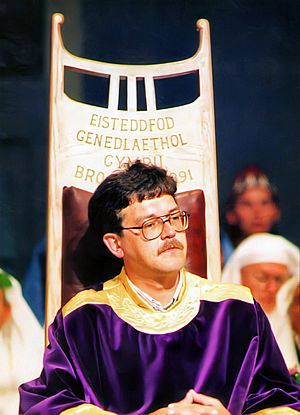 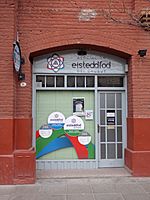 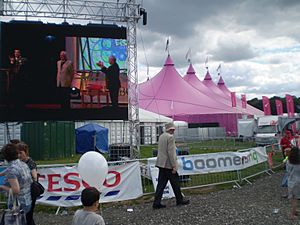 The National Eisteddfod of Wales, Mold 2007

In Welsh culture, an eisteddfod ( plural eisteddfodau) is a Welsh festival of literature, music and performance. The tradition of such a meeting of Welsh artists dates back to at least the 12th century, when a festival of poetry and music was held by Rhys ap Gruffydd of Deheubarth at his court in Cardigan in 1176, but the decline of the bardic tradition made it fall into abeyance. The current format owes much to an 18th-century revival arising out of a number of informal eisteddfodau. The closest English equivalent to eisteddfod is "session"; the word is formed from two Welsh morphemes: eistedd, meaning "sit", and bod, meaning "be". In some countries, the term eisteddfod (plural often eisteddfods) is used for certain types of performing arts competitions that have nothing to do with Welsh culture.

The International Eisteddfod is held annually in Llangollen, Denbighshire each year in July. Choirs, singing groups, folk dancers and other groups attend from all over the world, sharing their national folk traditions in one of the world's great festivals of the arts. It was set up in 1947 and begins with a message of peace. In 2004, it was (unsuccessfully) nominated for the Nobel Peace Prize by Terry Waite, who has been actively involved with the eisteddfod.

Other eisteddfodau in Wales

Smaller-scale local eisteddfodau are held throughout Wales. One of the best known is the Maes Garmon Eisteddfod, Mold (Welsh: Eisteddfod Ysgol Maes Garmon, Wyddgrug). Schools hold eisteddfodau as competitions within the school: a popular date for this is Saint David's Day.

Other Celtic and Norman eisteddfod-like events

There are some Celtic language specific cultural festivals similar to eisteddfodau. In Cornwall, an analogous event is known as "Esethvos Kernow" (Cornish for "Eisteddfod of Cornwall") and is connected with Gorseth Kernow. The Scottish Gaelic Mod and the Breton Kan ar Bobl also have similarities to an eisteddfod.

The eisteddfod idea has been taken up by non-Welsh speakers in the Channel Islands, particularly for the preservation of the local dialects Jèrriais and Guernésiais, and is called such. See Jersey Eisteddfod.

In Ireland, Seachtain na Gaeilge is similar to an eisteddfod; it celebrates Irish music and culture and promotes the use of the Irish language.

Welsh emigration, particularly during the heyday of the British Empire and British industrial revolution, led to the foundation of formal and informal Welsh communities internationally. Among the traditions that travelled with these emigrees was the eisteddfod, some of which - in a variety of forms and languages - still exist.

Eisteddfods are held across the UK, though in most cases any explicit link to specifically Welsh culture has been lost beyond the use of the name for an arts festival or competition.

In 1897 a Forest of Dean Eisteddfod, reportedly a choral competition, was founded at Cinderford. This annual event was still running in the 1940s.

In the Methodist Church and other non-conformist denominations in England youth cultural festivals are sometimes called eisteddfods. The Kettering and District Eisteddfod, for example, was founded in the Northamptonshire town by members of the Sunday School Union, and still runs every March.

For many years Teignmouth Grammar School in Teignmouth, Devon held an eisteddfod of art, music and drama competions in the Easter term.

The Bristol Festival of Music, Speech and Drama was founded in 1903 as the Bristol Eisteddfod, and the name still survives in the Bristol Dance Eisteddfod.

Eisteddfodau have been held since the initial Welsh settlement in Argentina in the late 19th century. Competitions nowadays are bilingual, in Welsh and Spanish, and include poetry and prose, translations (Welsh, Spanish, English, Italian, and French), musical performances, arts, folk dances, photography and video among others. A youth eisteddfod is held in Gaiman every September, and the main Chubut Eisteddfod is held in Trelew in October. An annual eisteddfod is also held in Trevelin, in the Andes and Puerto Madryn on the coast.

Eisteddfods (Australian plural) have also been adopted into Australian culture. Much like the Welsh original, eisteddfods are competitions that involve testing individuals in singing, dancing, acting and musicianship. The Royal South Street Eisteddfod in Ballarat has been running since 1891. At least 20 years earlier, as described in the diaries of Joseph Jenkins, Ballarat's Welsh community was conducting an annual eisteddfod each St David's Day (1 March).

The Sydney Eisteddfod commenced in 1933 and offers some 400 events across all performing arts, catering to 30,000 performers annually. Modern equivalents in Australia are competitions reserved for schoolchildren, though many have open sections where anyone (including professionals) may participate and compete. Typically, a prize may be a scholarship to pursue a further career. Many young Australian actors and dancers participate regularly in the various competitions scheduled throughout the year. Many other communities host eisteddfods, including Alice Springs, Darwin, Brisbane and Melbourne.

A number of international performing arts competitions in South Africa are called eisteddfods, such as the Tygerberg International Eisteddfod and the Pretoria Eisteddfod (first held in 1923). The word "eisteddfod" is sometimes also used by schools for ordinary cultural festivals, even if only one school's students participate.

Moving first as religious dissenters and then as industrial workers, many thousands of Welsh people emigrated to America from the 17th century. By 1851, Y Drych ('The Mirror') was just the latest of a number of Welsh-language newspapers, and in 1872 Hanes Cymry America ("A history of the Welsh in America") by R.D. Thomas attempted to catalogue all of the Welsh communities of the United States. Eisteddfods in North America are thought to have started in the 1830s though the earliest documented examples date from the 1850s.

The largest US eisteddfod was held In 1893 at the World Columbian Exposition in Chicago, featuring visiting Welsh choirs invited by The Cymmrodorion Society of Chicago.The Mormon Tabernacle Choir, which included a large number of Welsh immigrants, made its first appearance outside of Utah at this event. The eisteddfod idea was retained by some subsequent world's fairs, and helped to link the Welsh Eisteddfod community to its American off-shoot. By 1913, a sub-Gorsedd of North America with a Vice-Archdruid, Thomas Edwards (bardic name, Cynonfardd), was established at the Pittsburgh Eisteddfod, surviving until 1946.

On 28 July 1915, the International Eisteddfod held in San Francisco at the Panama-Pacific International Exposition drew competing choirs from around the nation, including one mixed group composed of the German members of the Metropolitan Opera Chorus from New York. The tightly-rehearsed, all-male Orpheus Club of Los Angeles was judged the winner and was awarded $3,000.

In the 21st century the Internet and social media helped new eisteddfods to spring up. The West Coast Eisteddfod (originally the Left Coast Eisteddfod) was founded by Americanwyr Cymreig in 2009 in Portland, Oregon. In 2011 the event was held at the Barnsdall Art Park in Los Angeles, famous for its buildings by Welsh-American architect Frank Lloyd Wright and close to Griffith Park, founded by Griffith J. Griffith, a Welsh-American philanthropist. The society's Americymru website and social media accounts now hold online eisteddfods.

All content from Kiddle encyclopedia articles (including the article images and facts) can be freely used under Attribution-ShareAlike license, unless stated otherwise. Cite this article:
Eisteddfod Facts for Kids. Kiddle Encyclopedia.