Cinderford is a small town on the eastern fringe of the Forest of Dean in Gloucestershire, England. A population of 8,116 people is recorded in the 2001 census, increasing to 8,494 in the 2011 census. The town is relatively young, coming into existence in the 19th century, following the rapid expansion of the local iron and coal industries.

A visual clue to Cinderford's origins can be seen in the style and layout of the town; with long rows of identical terraced housing; similar to many found in towns of the South Wales Valleys, that also developed around the coal mining industry. During the decline of the coal industry, in the 1950s and 1960s, Cinderford suffered more than Coleford, the other main town of the Forest, as most of the male population was employed in coal-mining. Today, Cinderford is home to a wide variety of industry, including light and heavy industry.

The name Cinderford, used for a crossing-point, is recorded as early as 1258. The name reflects the site of early ironmaking which created deposits of cinders, sometimes in large mounds.

Following the construction of Cinderford Ironworks in the late 1700s, and the opening of large mines nearby, the town was laid out on a fairly conventional urban plan. In 1841 there were two inns and at least ten beerhouses in and around Cinderford. A new church was consecrated at Cinderford in 1844 and dedicated to St. John the Evangelist. By 1843 Cinderford also had a Baptist church which became by far the largest Baptist meeting in the Forest of Dean. Methodists and Primitive Methodists also had chapels in the area, and there was even an iron building which became known as the Ark, which was registered in 1886 by a group called the Blue Ribbon Gospel Army.

A coke-fired furnace was established in around 1797. It was situated 800 metres north of Cinderford bridge and used coke brought from Broadmoor, to the north, by a short canal. The furnace struggled to compete with iron furnaces elsewhere, and fell idle ten years later. It was revived in 1829 when new works on the old site were established by the Forest of Dean Iron Company, and in 1841 there were three furnaces producing 12,000 tons of iron a year and employing 100 men and boys. Only one furnace at the works was in blast in 1890 and the works closed in 1894. 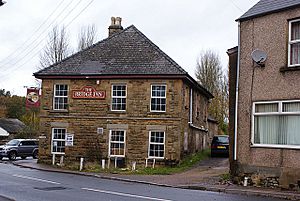 By the 1840s Cinderford had a number of foundries and small engineering firms supplying the mining industry with machine parts, and it remained a centre for metal industries in the early 20th century.

For many years coal mining was the principal industry in the area. Lightmoor coal mine was being deepened in the late 1830s. Trafalgar colliery which was in production in 1860, was the only large mine in the coalfield run by free miners in the later 19th century. Trafalgar closed in 1925. A deep mine, called Northern United, was begun north-west of Cinderford in 1933, but Lightmoor, with a workforce of 600 in 1934, was the main colliery in the Cinderford area until it closed in 1940. There were still many smaller collieries in the Forest of Dean, employing 84.5 per cent of the adult male population in the Cinderford area, until the industry declined in the 1960s.

Cinderford's High Street and Belle Vue Road lie on the A4151, which links with the A48 (Gloucester-Chepstow road) to the east.

A new Parkway station to serve the town is proposed for development at Newnham, and would be serviced by trains on the Maesteg-Cheltenham Spa services.

Cinderford is served by a regular bus service to Gloucester and Coleford, the bus station was dismantled in the late 1980s and no longer exists. Details of local bus destinations from Cinderford can be found here.

The closest airports are in Staverton (between Gloucester and Cheltenham), as well as Bristol Airport and Cardiff Airport.

The vicar of Benefice of Cinderford with Littledean is Mike Barnsley who has held the post since 4 March 2011.

All content from Kiddle encyclopedia articles (including the article images and facts) can be freely used under Attribution-ShareAlike license, unless stated otherwise. Cite this article:
Cinderford Facts for Kids. Kiddle Encyclopedia.