The Great Central Railway (Nottingham) (formerly known as Nottingham Transport Heritage Centre) is a heritage railway and transport museum on the south side of the village of Ruddington in Nottinghamshire. The route consists of almost 10 miles (16 km) of the former Great Central Railway Main Line from Loughborough South Junction (with the Midland Main Line) to Fifty Steps Bridge and the site of Ruddington's former GCR station, plus a branch line from Fifty Steps Bridge to Ruddington Fields station which is located on a former Ministry of Defence site next to Rushcliffe Country Park.

There are stations open to the public at Ruddington Fields (within the main centre site) and at Rushcliffe Halt. The GCR(N) aim to re-open the former station at East Leake in the longer term.

The railway is currently not connected to Great Central Railway (at Loughborough Central in Leicestershire), although there are plans well underway and work has started to reunite the two preserved lines. This is a major engineering project that is expected to be completed during 2024 - 2028. Some 5.5 miles (8.9 km) of the line is used by gypsum trains serving the British Gypsum works at East Leake.

After the major part of the GCR main line was closed by British Rail in 1968, a section from Nottingham to Rugby was retained until 1976. Preservationists had hoped to convert that into a live heritage line, but funding was impossible to obtain — except for the length from Loughborough to Belgrave and Birstall, north of Leicester. British Rail decided to maintain rail connection from Loughborough to Ruddington MoD depot until closure and the GCR main line became an unsignalled BR single-track branch. When the Ministry of Defence depot at Ruddington was closed, the 2.77 miles (4.46 km) of track from East Leake to Ruddington was no longer needed by BR. It was also considered that British Gypsum was unlikely to bring in any more bulk materials from coal-fired power stations by rail. The GCR Northern Development Association was formed with the aim of reconnecting the then two GCR sections once again. Work initially concentrated on restoring Rushcliffe Halt, but when Nottinghamshire County Council, which had acquired the whole of the 220 acre MoD site, agreed to lease 12 acres of the former MOD site to the Association, the grand scheme of the Nottingham Transport Heritage Centre was devised to encompass not only railway preservation but any transport heritage relevant to the area.

In the 1990s, work on what had become the Great Central Railway (Nottingham) Ltd was concentrated mainly at Ruddington. The transfer of former BR property to Railtrack and then Network Rail hindered attempts to purchase the line. Ironically, it was British Gypsum's intention to renew rail freight traffic that was the catalyst that allowed the GCR(N) to buy the line and restore it initially for freight use.

At East Leake station, houses were built on the former goods yard in the 1980s and some were built only yards from the remaining track. The disused nature of the line combined with a solicitor's error led the new occupants to believe that the line was closed, but BR had never listed the line as closed and could have resumed operations at any time. However, when the GCR(N) applied for a Transport and Works Act 1992 Order to purchase and operate the line, objections from local residents resulted in a permanent limit on hours of passenger train operation through the former East Leake Station and the station remaining closed.

For Network Rail to route freight trains onto the line during the week and GCR(N) to operate heritage trains at the weekend, a length of rail north of East Leake was removed to create two separate railways. However, because of the 'rail break', the GCR(N) were unable to access Rushcliffe Halt. This has now been updated with an alternative system of work. Despite the full line between Loughborough South Jn and Ruddington being owned by the GCN(N), when the GCR(N) require to operate trains into East Leake or through to Loughborough, possession of the line is taken from Network Rail. Network Rail then lock the line out of use from their end allowing GCR(N) operation through to Loughborough. In 2003, regular services to Rushcliffe Halt resumed. Passenger trains further south now run on a regular basis to "Loughborough High Level", although no station facilities exist here.

Ruddington Fields is the main station on the line and the home of the Great Central Railway (Nottingham). It features a road transport building, locomotive sheds, GCR signal box (ex Neasden), miniature and model railways, cafe, visitor centre, toilets and car park. The Rushcliffe Country Park, created over the balance of the ex MoD site, surrounds the GCRN facilities here. In 2009, a new platform was opened and a second platform is currently part way through construction. 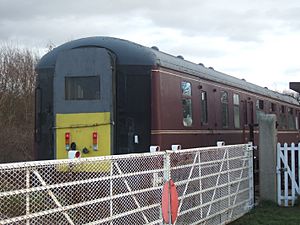 The gated Asher Lane Crossing is on a private road which was formerly the MOD depot perimeter road. It is a short walk from the Country Park to the crossing, where it is possible to see trains passing and the crossing keeper at work. There was a set of sidings here, called Asher Lane Exchange Sidings, but they have since been removed.

Fifty Steps Bridge is the end of the spur from Ruddington Fields, known as Ruddington South Junction, where trains reverse for the onward journey to Loughborough. The bridge itself originally had 'Fifty Steps' but subsequent modifications have increased that number. The former Ruddington station is further north and, following the reunification of the two halves of the preserved GCR, could see improvements made to aid towards eventual reopening, the trackbed being owned by the charity, East Midlands Railway Trust, to support the eventual extension of the line.

The Gotham branch-line was a short, freight branch connected to the Great Central Mainline via Gotham Sidings; it was lifted in 1969. The branch originally served a gypsum mine which was located on the north-western side of the village of Gotham. The sidings will be reinstated along with a short section of the branch line following reunification as part of a project to double-track the Nottingham section of the GCR. Trains pass across wide open countryside at Gotham Moor, which has much wildlife, and the line passes under a few bridges. 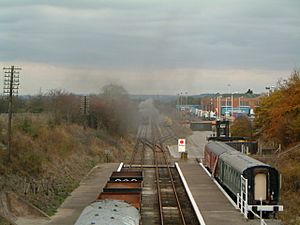 Rushcliffe Halt railway station is named after the nearby "Rushcliffe Golf Club". Station development is ongoing with a new footbridge being prepared to replace the original which was dismantled. Just next to the station at Hotchley Hill is the British Gypsum works. On weekdays, trainloads of gypsum are delivered to the works and unloaded on the concrete pad visible from the station platforms. An Art Deco LNER signal box (Hotchley Hill) replaced the original GCR structure in the late 1940s when the sidings were extended.

The original station near the centre of the village of East Leake is currently disused and exists only as an island platform with the stairwell of the station's subway bricked up. There are long term aspirations to reopen the station but would required the Light Railway Order under which the railway operates to be amended to allow this. This would provide the community with a station once again (and ties in with the local Parish Plan in that respect), as well as a potential home for the thriving East Leake Historical Society. Visitors to the area arriving on the railway would also be able to visit the local pubs and restaurants. In July 2018, a fire broke out along the line Near East leak station. It was caused by the train coming past and sending sparks and flame into bone dry grass. The fire stretched approximately half a mile before the train was instructed to stop. The fire was put out within an hour of it starting. That part of the line was temporarily closed. 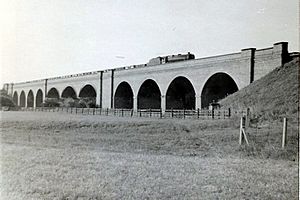 Barnstone Tunnel (which is 98 yards long) is the only tunnel on the preserved line. It was built by the Victorian navvies and was dug out by hand. Located close to the tunnel was another set of sidings, which although removed could be reinstated in the future for extra storage. Between that Tunnel and Loughborough the line follows the ridge forming the Eastern side of the Soar Valley. The railway continues towards Loughborough, passing close to the hamlet of Stanford-on-Soar. The line travels over the River Soar at Stanford Viaduct, close to the Brush works, now part of WABTEC.

GCRN services currently terminate at a Stop Board close to the A60 road. Beyond that is the connection to Network Rail and the Midland Main Line (MML) at Loughborough South Junction. The loco sheds of the Great Central Railway at Loughborough are just visible across the MML, about one mile (1.6 km) away. Plans are under way reconnect the two halves of the preserved GCR with the new bridge across the MML now completed and fundraising for the next stage underway.

Once the two preserved sections are re-connected (with the bridging of the Loughborough Gap of 500 metres, three bridges and a 400m embankment), this would extend to a total of over 18 miles (29 km) in length. Since then GCR is seeking some £7 million of which £1 million has been raised by donors so far. 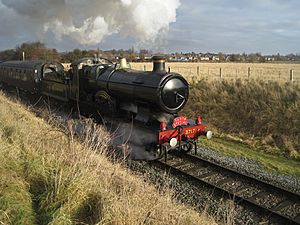 The railway operates classic steam / diesel hauled services to Rushcliffe Halt and Loughborough. Most trains are steam-hauled, but the resident classic heritage diesel collection is one of the best in the Midlands. GC Railway (Nottingham) operate every Sunday and Bank Holiday Mondays from Easter through to October, and also Saturdays during school holidays, and during December ('Santa Specials' during weekends before Christmas and on Christmas Eve, and post Christmas services on 27/28 December). As well as regular services, GCRN also operate a host of Special Events and 'Gala' days. There are 7 steam locomotives permanently based at the railway, 6 of them being of industrial origin, 4 of these being locomotives which once worked at Stewarts & Lloyds at Corby, Northamptonshire. The line has also hosted locomotives of BR/Big 4 pedigree, notable examples in recent years being GWR 3700 Class 3440 City of Truro, LBSCR Terrier 662 "Martello" and LNER O4 63601 and currently is home to a Stanier 8F 2-8-0. 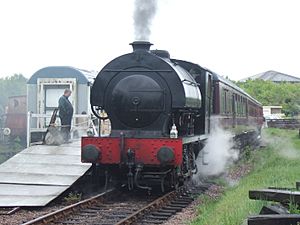 RSH Ugly class 0-6-0ST No. 56 preparing to depart Ruddington with a passenger train in May 2009 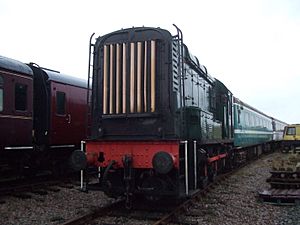 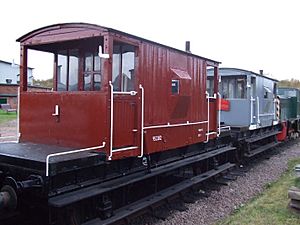 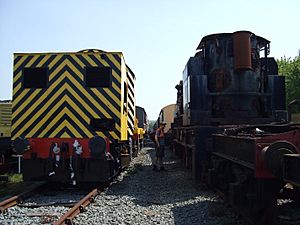 A Charity called the GCR Rolling Stock Trust based at the Great Central Railway (Nottingham) owns the third largest (after the Bluebell Railway and Isle of Wight Steam Railway) collection of pre-grouping rolling stock known to exist in the UK, including the famous 'Barnum' carriages (so named as these were the type hired by P.T. Barnum's travelling circus) and some items that even herald from the days of the Manchester, Sheffield and Lincolnshire Railway—the GCR's title before completing the London extension. The details of the stock are below.

GCR suburban 1905 No.793, not part of the RST collection but under the wing of the GCR 567 Group is currently stored at Swithland Sidings — just been examined and found to be in very poor condition. Now placed under a new tarpaulin for further weather protection.

Also located at the GCRN is the Nottingham Area Bus Society, which is a collection of vintage buses that originally operated for local bus companies. Bus rides are offered several times a year during vehicle rallies. The bus collection is available to view during the railway's open days. 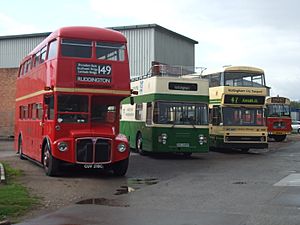 All content from Kiddle encyclopedia articles (including the article images and facts) can be freely used under Attribution-ShareAlike license, unless stated otherwise. Cite this article:
Great Central Railway (Nottingham) Facts for Kids. Kiddle Encyclopedia.