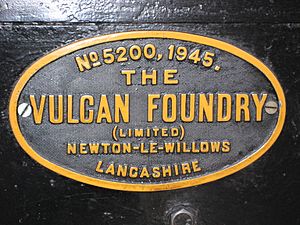 The Vulcan Foundry was a British locomotive builder sited at Newton-le-Willows, Lancashire. It opened in 1832 as Charles Tayleur and Company to produce girders for bridges, switches, crossings and other ironwork after the opening of the Liverpool and Manchester Railway. In 1832, Robert Stephenson (son of George Stephenson) became a partner. The company became The Vulcan Foundry Company in 1847 and acquired limited liability in 1864. From the beginning of 1898, the name changed to The Vulcan Foundry Limited, dropping the word 'company'. In 1957, the business became part of the English Electric group.

All content from Kiddle encyclopedia articles (including the article images and facts) can be freely used under Attribution-ShareAlike license, unless stated otherwise. Cite this article:
Vulcan Foundry Facts for Kids. Kiddle Encyclopedia.