Newton-le-Willows, formerly Newton-in-Makerfield, is a market town in Merseyside, England. Historically a part of Lancashire, it is situated about midway (about 15 miles (24 km) from each) between the cities of Liverpool and Manchester, 4 miles (6 km) to the east of St Helens, 5 miles (8 km) to the north of Warrington and 7 miles (11 km) to the south of Wigan. The population of the town taken at the 2011 census was 22,114.

The name Newton means "new town", while Makerfield is an ancient name for the district from a pre-English word meaning "wall", and the English word "field". Neweton was mentioned in the Domesday Book. "In Makerfield" was added to distinguish it from other Newtons and recorded as Makeresfeld in 1205 and 1351, as Makefeld in 1206, Makerefeld in 1213 and Makerfield since 1242.

Before the Norman conquest, Newton was head of a hundred. The Domesday hundred was assessed at five hides one of which included Newton. The lord of the manor was Edward the Confessor at his death in 1066. The Newton Hundred was subsequently combined with the Warrington and Derby Hundreds to form the West Derby Hundred.

It was an agricultural village, albeit with borough status, until the arrival of the railways in 1830. There was some industry: there are five cotton spinners recorded in an 1825 directory. However, it was the coming of the railways that transformed a small village into the world's first "railway town", although places such as Crewe, Derby and Swindon soon overtook Newton in size and importance. The town also developed into a major coal mining area, being on the South Lancashire Coalfield.

The fields between Newton and Winwick were the site of one of the last battles of the Second English Civil War. 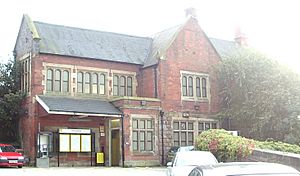 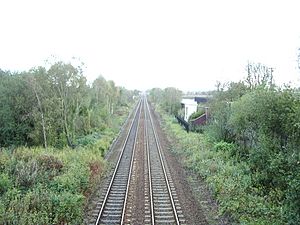 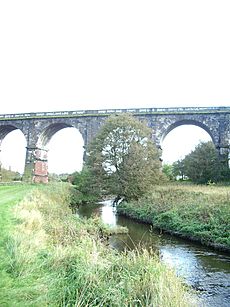 Newton's history since the 19th century has been very closely linked with the railway industry. The Vulcan Foundry was opened in 1831 and later developed into one of the world's foremost locomotive manufacturers. Vulcan Village, the southernmost suburb of Newton was developed to house workers from the foundry and has in recent years become a conservation area.

The western area of the town, Earlestown also developed with the coming of the railways. Earlestown was also built as a factory village, but for the Viaduct Foundry, which later became the London and North Western Railway's principal waggon works. Since Victorian times, Earlestown has been the fastest-growing area of the town, and thus Newton-le-Willows' town centre is situated in Earlestown. Between Earlestown and the Vulcan Village is the largely residential suburb of Wargrave.

William Huskisson, Member of Parliament for Liverpool and an early supporter of railways, was killed at Parkside near Newton when he was run down by Stephenson's Rocket locomotive on the opening day of the Liverpool and Manchester Railway. There is a memorial at the spot where the accident happened. A modern bridge in the town centre is named in memory of Huskisson.

Newton has two historic railway stations. Newton-le-Willows railway station is in the old original part of town and Earlestown railway station, opened in 1830. They are two of the oldest railway stations in existence. Earlestown was an important junction where the original Liverpool and Manchester line was joined by the 1837 line running south to Birmingham. The town has also had three other railway stations, situated at Parkside, where Huskisson's fatal railway accident happened, at the Vulcan Village and one serving the old racecourse, closed when Haydock Park Racecourse was opened. Two other local railway related landmarks are Newton Viaduct and the Sankey Viaduct which is locally known as the "Nine Arches".

The town also had other industries: sugar refining, chemicals, glass, biscuit manufacturing machinery and coal mining. Parkside Colliery opened in the 1960s with an expected lifespan of 100 years but closed in 1992. The colliery hit the national headlines due to demonstrations against its closure. The closure of Parkside marked an end to Lancashire's centuries old coal industry. The town is the home of the head office of Nicholls Foods, the makers of Vimto soft drinks.

Newton stands in the centre of the large Greater Manchester and Merseyside conurbation. It is a small market town in North West England on the western edge of Chat Moss. The town consists of four districts, Earlestown, Wargrave, Vulcan Village and the ancient Newton in Makerfield area, that makes up the eastern part of the town.

The old centre of Newton is on the A49 road (formerly the Warrington-Wigan Turnpike Road) and has a number of Georgian buildings, and is an attractive residential area. The High Street area has a village appearance with small local shops serving the local area. There used to be a street market outside the parish church, which in the 1890s was moved to Earlestown. The old town hall was demolished some years ago after serving as a civic hall.

With the Industrial Revolution, the area of Earlestown developed about a mile west of the original Newton centre. As this part of the town grew, amenities were moved to Earlestown from Newton. As the market was moved to Earlestown and a new town hall was built to house the old Newton council, the new town centre became based on Earlestown. During recent years the town hall in Earlestown has been allowed to some extent to fall into a poor state of repair, it has recently been registered as a grade II listed building.

The town centre is now based in the Earlestown district of the town, with its main shopping street, Market Street, being pedestrianised during the 1980s. Bridge Street, Oxford Street, Queen Street and Earle Street make up the shopping area (Earle Street was formerly named Pepper Alley Lane up to the late 19th century).

The market is a major attraction for people from the surrounding areas. There are many small long established independent retailers although the number of national retail organisations in the town is increasing. As with other towns, many larger retail stores have closed, such as Woolworth's in 2009 and Safeway due to the companies ceasing trading. The large Somerfield and Co-op town centre stores have closed due to those companies merging, however the Co-op has a small store in the Wargrave area of the town. A positive sign for the town is how these larger premises were relet to other national retailers. Tesco acquired the Safeway store, Wilkinson's took over the former Somerfield store and the former Co-op superstore was subdivided into a number of units which provided the town with a new main post office, Netto supermarket, Morrisons supermarket and Store Twenty One clothing store. The former Woolworth's store soon reopened as Heron Frozen Foods, a fast-growing Yorkshire-based food retailer. Other major national retailers to have opened in the town recently include Superdrug, McDonald's, Shoe Zone and Card Factory. The town also has a number of other long-established national companies like Boots, Greggs bakers and Johnson's Cleaners, Enegi Hair 28-30 Market Street and most of the major banks. Whiston Motor Factors have taken over the old Fred Morts jewellers in Oxford Street, and there are a number of free car parks in the town centre. Another small retail area exists at Park Road South in the Wargrave area of the town, with the small Co-op supermarket. Also in Earlestown there are some private IT shops.

The M6 and M62 motorways, and also the A580 East Lancashire Road pass close to the town. This has helped Newton become an important commuter town now that most of its industry has gone. There have been many new housing estates built around the outskirts of the town.

England's first operational canal, the Sankey Canal passes through the town and is crossed, on the Sankey Viaduct, by the world's first passenger railway, also within the boundaries of the town.

Newton-le-Willows and Earlestown railway stations have a good regional service with regular trains running to Liverpool and Manchester, St Helens, Warrington, Chester, West Yorkshire and along the North Wales coast to Llandudno. Earlestown is a very large station for the size of the town, with 5 platforms. On platform 2 is the old waiting room, regarded as one of the oldest remaining railway buildings.

There is a small bus station in Tamworth Street, with a number of bus routes running around the town, and out of town services connecting neighbouring Burtonwood, Haydock, Ashton-in-Makerfield, Lowton, Garswood and major towns of Warrington, St. Helens, Wigan and Leigh.

Once part of the ancient parish of Winwick, the town is split into four Anglican parishes, St Peter's covering Newton, St John's covering Earlestown, Emmanuel covering Wargrave and All Saints' covering the northern parts of the town.

Similar to other towns in Lancashire, Newton has a large Roman Catholic population and there are three Catholic churches in the town, St Patrick's in Earlestown, St Mary and St John's in Newton and St David's in Wargrave.

There are also many other denominations represented in the town, such as the Methodist and Baptist churches in the town centre.

In 2013 the first Muslim community centre was established located at 9 Queen Street, nearby Earlestown Railway Station.

All content from Kiddle encyclopedia articles (including the article images and facts) can be freely used under Attribution-ShareAlike license, unless stated otherwise. Cite this article:
Newton-le-Willows Facts for Kids. Kiddle Encyclopedia.