While the first record of the town is in the Domesday Book of 1086, much of the town, including the current town centre, was developed as a second wave new town in the 1960s. The town's initial development as a coal town coincided with the Industrial Revolution in the 19th century; the town lies on the Lancashire Coalfield.

Skelmersdale is situated in a small valley on the River Tawd. The town was designed to accommodate both plant life and compact housing estates. Even in the town centre there is an unusually large amount of forestation. The large Beacon County Park lies to the east of Skelmersdale, where the iconic Beacon Point lies, along with the golf club.

The town borders the village of Upholland to the east, eventually leading into the Wigan area of Greater Manchester, West Lancashire's administrative centre Ormskirk to the north-west, and Saint Helens to the south. The M58 runs through Skelmersdale.

The New Town is the larger eastern half of the town, the Old Town 'Old Skem' is the smaller portion to the west.

It is known locally as "Skem", with a further distinction being made between "Old Skem" (the area which was a small mining town prior to 1961) and the broader swathe of development on the east side of the town.

Until the creation of Skelmersdale Urban District Council at the end of the 19th century, the town was part of the Parish of Ormskirk in the West Derby hundred, an ancient subdivision of Lancashire, covering the southwest of the county.

In the mid-14th century, the manor of Skelmersdale was held by William Dacre, 2nd Baron Dacre.

Skelmersdale's population in 1851 was only 760, but 50 years later it had increased to 5,699. It was a busy coal mining town. Sadly, there were over 100 fatalities in Skelmersdale collieries from 1851 to 1900, according to the Reports of the Inspectors of Coal Mines, and an unknown number of serious injuries. In 1880 there were 14 Skelmersdale colleries – most of them closed in the 1920s and '30s. 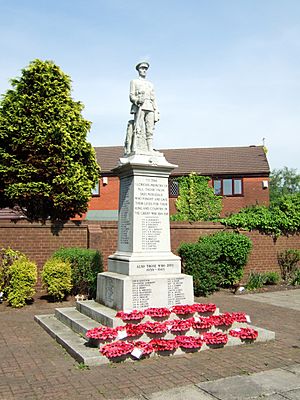 The miners, many of whom were Welsh immigrants, brought with them their own brand of Nonconformist Christianity. By the start of the 20th century there were at least six dissenting chapels in the town: two Wesleyan (Berry Street, closed in the 1920s, and Liverpool Road, closed 1969), an independent Methodist, a Primitive Methodist, a Congregational, and a Welsh Chapel (closed in 1963).

Today, there is little to remind people that the town was ever associated with the once great Lancashire Coalfield.

There were also numerous brickworks in the area, and in the early-20th century Victoria County History, Skelmersdale was described as "a particularly bare, unpleasing district" owing to its coal mines and brickworks.

Skelmersdale was designated a New Town in 1961, designed to house overspill population from the north Merseyside conurbation. The town was the first in the second wave of designations.

Due to the arrival of a large number of former Liverpool residents, the town retains a strong cultural association with Liverpool. Although the traditional accent may perhaps be exaggerated upon in younger generations, the role of Liverpool in the recent history of Skelmersdale cannot be understated, and many do still feel a close connection with the city.

2006 was to see a regeneration drive for the town coordinated through English Partnerships and the Northwest Regional Development Agency and publicly headed by the designer Wayne Hemingway. Among the proposals was a new central focus for the entertainment and commerce for the town in the evening.

In 2012, a £20m vision to create a thriving town centre for Skelmersdale was revealed. It is expected to create as many as up to 500 permanent jobs, and current projections seem to satisfy that target. Although Skelmersdale faces a looming employment crisis, the regeneration of the town centre is a step towards recovery, and up to 100 extra jobs would be generated during the scheme's construction phase alone.

Proposals include a new food store as well as number of bars, shops and restaurants, and plans to include a five-screen cinema are also in the works. A new promenade would be fronted by these establishments to overlook the Tawd Valley Park, and a new civic square would also be created between the Concourse Shopping Centre and the town library. Regeneration specialists St Modwen have been working on the proposals with West Lancashire Council and the Homes and Communities Agency. As of February 2017, none of these developments have yet been realised. 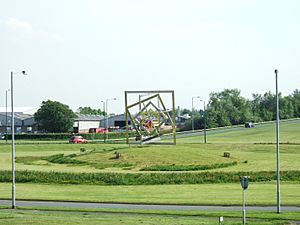 Hope Island, one of many roundabouts found within Skelmersdale.

Skelmersdale was originally designed to work on a roundabout system, on which it still sits today. For ease of access there is a vast subway network allowing pedestrians to move through the town without needing to cross potentially hazardous roads. However, in recent years, the subway system has been called into question with regards to its safety and sustainability, as they are not regularly maintained by the county council.

There are no traffic lights in the town. Skelmersdale's road system has improved with better signage, although visitors still frequently get lost.

The M58 motorway (Liverpool – Wigan Motorway) runs along the south of Skelmersdale from the nearby M6 motorway to the Switch Island interchange at Liverpool. The A570 and the A577 both provide connections.

The New Town areas of Skelmersdale have a road-naming system where "Road" and "Street" are rarely used and single-name roads are common, e.g. Abbeywood, Fairburn, Brierfield, Thornwood. "Road", "Street", "Lane" and "Drive" do appear in road names, but only in the parts of the town (bordering on Ormskirk, St. Helens and Wigan) that pre-date the New Town development. The road names in New Town areas are also arranged in a loosely alphabetical format with large areas being defined by a single letter, for example Larkhill, Leeswood, Ledburn and Lindens all connect to Ashley Road in the Ashurst area.

From September 2011, the company providing most of Skelmersdale's bus services, Arriva, closed their depot in Skelmersdale, which employed 129 people. The depot was first constructed for Ribble Motors in the 1970s, and the premises will now be sold. Skelmersdale is now served by buses from Arriva depots in St. Helens, Bootle and Southport.

In March 2009, Network Rail proposed to extend the existing quarter-hourly Liverpool Central to Kirkby service, to terminate at a new station in the centre of Skelmersdale. Rainford will then become an interchange station for services to and from Wigan Wallgate. In June 2009, the Association of Train Operating Companies published a report, Connecting Communities, which also recommended the opening of a new rail link to Skelmersdale. This time the recommendation was via the Skelmersdale Branch from Ormskirk. In February 2017, Lancashire County Council identified the site of the form Glenburn Sports College / Westbank Campus site as the preferred location for a railway station for the town. Despite the Glenburn Sports College being owned by the council, the Westbank Campus site is owned by Newcastle College and requires purchase by the council in order for the station to be built.

Skelmersdale has units of the Air Training Corps, Army Cadet Force and Sea Cadet Corps. These units take part in the local community life and are routinely seen attending the Remembrance Sunday parade in the old town. 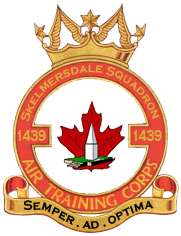 The Army Cadets are part of 'S' Company of the Lancashire Force. They are based at Daniels Lane.

The Sea Cadets are also well established in Skelmersdale as "TS Rodney" and are based at Tawd Road.

Although consisting predominantly of housing estates, Skelmersdale's industry includes the Co-operative Bank which employs 650 people, distribution centres for Asda, P&G, Victorian Plumbing, a Walkers snack food factory, Chemist 4 U and many others. Skelmersdale houses the corporate base and a distribution centre for Matalan, the discount clothing and homewares store. Frederick's Dairies, who make ice cream for Cadbury, is located in Skelmersdale.

Skelmersdale's town centre is made up of the Concourse Shopping Centre, (colloquially known as "the Connie") as well as an Asda supermarket, a library, a swimming pool and gym named after former Minister of Health Aneurin Bevan, another gym, West Lancashire College's main campus, a car garage and a new development including a Lidl supermarket and a B&M store.

The Concourse is home to a number of national chain stores such as Poundland, Home Bargains and Argos, as well as a McDonald's restaurant and KFC, both of which are located in the nearby car park. In early 2020, a Domino's Pizza chain was opened on the ground floor. The Concourse used to have an artwork by Alan Boyson, in the shape of a pyramid. The pyramid was located in front of the entrance opposite the ecumenical centre until the early to mid-1980s but was removed for safety reasons.

West Lancashire College has a campus in the centre of the town. The college merged with Newcastle College in 2007 and was graded as 'outstanding' in a recent Ofsted inspection. In 2021, Professor Brian Cox launched the college's 'School of Science', a £1.3 million facility with the intention of increasing the number of students who study Science, technology, engineering and mathematics.

There is a Transcendental Meditation movement community within Skelmersdale, called "European Sidhaland". It has a Maharishi School which, as of 2019, performed 'well above average' according to Ofsted. In 2011, it was one of 24 schools that applied for and received government funding as a flagship free school.

Skelmersdale is also home to a large public library with facilities including free internet access and an extensive local history section.

The town is host to a number of cultural and social organisations, such as the Artz Centre which provides opportunities in creative fields, and The Birchwood Centre which aims to reduce social isolation and homelessness.

The town featured in TV series Utopia and features in the musical Blood Brothers.

The town's football team, Skelmersdale United F.C., plays in the Premier Division of the North West Counties Football League and was a FA Vase winner in 1971. One of its former players, Steve Heighway, went on to play for Liverpool. Former Everton midfielder Leon Osman, who takes his son to Dalton St Michael's Primary School in nearby Dalton, played for the club in his youth. Former Cardiff City player Craig Noone also once played for the club. Skelmersdale Football Club is currently located at JMO Sports Park in the town.

The town is host to an archery club, the Bowmen of Skelmersdale, whose collective members hold 19 county records and 14 world records held by three members of the same family, (Melissa-Jane, Harriet and Gary Daniel), 6 of which were claimed at the National Flight Championships on 19 August 2006 held at RAF Church Fenton. Furthermore, Skelmersdale Cricket Club was established in 1891.

All content from Kiddle encyclopedia articles (including the article images and facts) can be freely used under Attribution-ShareAlike license, unless stated otherwise. Cite this article:
Skelmersdale Facts for Kids. Kiddle Encyclopedia.