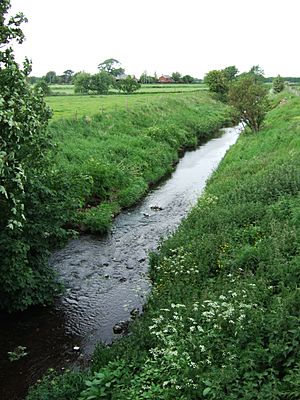 The River Tawd flows through Skelmersdale and Lathom in West Lancashire.

Tawd Bridge carried Ormskirk Road, the main arterial road from Wigan to Ormskirk and Southport. This is well known to Upholland locals as the place where highwayman George Lyons held up his victims during the 18th century. Today, the river flows through the middle of Skelmersdale in large culverts. It emerges near the town's shopping centre, the Concourse, and flows into a country park and a Scout association campsite, on the site of the 19th and early 20th century colliery. Parts of the river are a county biological heritage site.

It is a tributary of the River Douglas which it joins in Lathom.

The water quality of the River Tawd was as follows in 2016. Reasons for the quality being less than good include physical modification of the channel and some sewage discharge.

All content from Kiddle encyclopedia articles (including the article images and facts) can be freely used under Attribution-ShareAlike license, unless stated otherwise. Cite this article:
River Tawd Facts for Kids. Kiddle Encyclopedia.