Kids Encyclopedia Facts
Not to be confused with Bootle, Cumbria.

Bootle (pronounced /ˈbuːtəl/) is a town within the Metropolitan Borough of Sefton in Merseyside. The town was formerly known as Bootle-cum-Linacre and has a total resident population of 77,640.[disputed – discuss]

Historically in Lancashire, Bootle's economy has been centred on the docks and their associated industries for decades.

Bootle Docks was created as a part of the Mersey Docks and now promoted as Port of Liverpool, with the Liverpool and Wirral Docks, being located on both bank sides of the River Mersey. Bootle Docks are situated at the northern end, that is closer to the Irish Sea estuary.

Bootle, along with Southport, is one of the two main administrative headquarters for the Metropolitan Borough of Sefton. Among Bootle's neighbouring districts are Kirkdale to the south, Walton to the east, with Seaforth, Litherland and Netherton to the north. To the west the it is bounded by the River Mersey. In the centre is a sizeable area of large office blocks, and the Leeds and Liverpool Canal.

The old civic centre of Bootle contains large Victorian buildings such as the town hall and the municipal baths.

Bootle was originally a small hamlet built near the 'sand hills' or dunes of the river estuary. The settlement began to grow as a bathing resort for wealthy residents of Liverpool in the early 19th century. Some remaining large villas which housed well-to-do commuters to Liverpool are located in the area known locally as 'Bootle Village'. 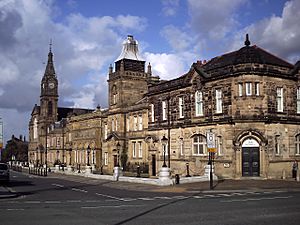 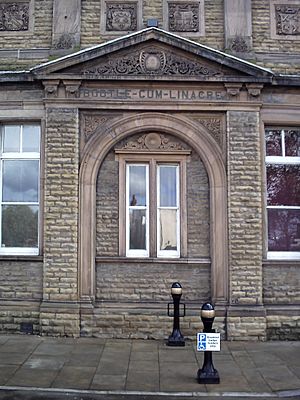 The Liverpool, Crosby and Southport Railway arrived in the 1840s and Bootle experienced rapid growth. By the end of the 19th century the docks had been constructed along the whole of the river front as far as Seaforth Sands to the north. The town became heavily industrialised. Bootle was incorporated as a municipal borough in 1868 under the Municipal Corporations Act 1835, and was granted the status of a county borough by the Local Government Act 1888 in 1889, becoming independent from the administrative county of Lancashire. During this time period it was sometimes formally known as Bootle-cum-Linacre. Orrell was added to the borough in 1905. There are still large areas of Victorian terraced houses in Bootle, formerly occupied by dock workers. These are built in distinctive pressed red brick.

Bootle's town hall and other municipal buildings were erected in the last quarter of the 19th century. The population of the town swelled during this period, boosted in large part by Irish immigration and the attraction of plentiful work on the docks. The wealth to pay for the splendour of the town hall and the gentrified 'Bootle Village' area was generated by these docks. The skilled workers lived in terraced houses in the east of the town, while the casual dock labourers lived in cramped, dwellings near the dockside. Stories about three streets in particular caused great alarm. They were Raleigh Street, Dundas Street and Lyons Street.

Bootle was remarkable in other, more positive ways. It was the first borough to elect its own school board, following the passage of Forster's Education Act of 1870. In 1872 Dr R.J. Sprakeling was appointed the first Medical Officer of Health, and was instrumental in improving sanitary conditions in the town. The Metropole Theatre on Stanley Road played host to stars such as music hall singer Marie Lloyd. The emporia in the Stanley Road and Strand Road areas of the town were filled with goods from all over the British Empire. Tree lined streets surrounded magnificent open spaces, such as Derby Park, North Park and South Park. Beautiful Roman Catholic and Anglican churches sprang up all over the town, and Welsh immigration brought with it Nonconformist chapels and the temperance movement. Local societies thrived, including sports teams, scouts and musical groups. The Bootle May Day carnival and the crowning of the 'May Queen' were real highlights of the social year. The town successfully fought against absorption by neighbouring Liverpool in 1903. This was a matter of some civic pride to the people of Bootle and the Latin motto of the town, 'Respice, Aspice, Prospice,' (look to the past, the present, the future) was emblazoned on school buildings, stationery, the local press, police uniforms and all manner of other places. The development of the area can be seen by looking back at one of the earliest old Ordnance Survey maps of the area published by Alan Godfrey Maps (ISBN 9780850542455) and what it looks like now on Multimap.

The docks made Bootle a target for Nazi German Luftwaffe bombers during the Liverpool Blitz of the Second World War, with approximately 90% of the houses in the town damaged. Situated immediately adjoining the city of Liverpool, and the site of numerous docks, Bootle had the distinction of being the most heavily bombed borough in the UK. Bootle played an important role in the Battle of the Atlantic. The famous u-boat hunter the Royal Navy's Captain Frederic John 'Johnny' Walker, would rest in the Mayor's Parlour of Bootle Town Hall and his ship, HMS Starling, sailed out of Bootle and the ship's bell and flags signalling the General Chase can still be seen in Bootle Town Hall's council chamber today.

After the Second World War large council housing estates were built inland from the town centre, including the area of Netherton, which was built on new town principles. The Liverpool Overhead Railway and Liverpool Tramways Company closure in the 1950s reduced Bootle's connection to Liverpool.

Bootle did share in the postwar boom. The centre of the town was redeveloped and the 'Bootle New Strand' shopping centre was opened in the late 1960s. At the same time, new offices were built in the town centre. The town lost its access to the beach when neighbouring Seaforth Sands was redeveloped in the early 1970s, but the Seaforth Container Port brought new jobs into the area. The local authority, and other 'social' landlords, saw to it that new housing was built and older stock renovated. Bootle did not go down the route of massive housing clearance, and many local communities remained intact.

The borough celebrated its centenary in 1968 and civic pride was much in evidence.

The docks declined in importance in the 1960s and 1970s, and Bootle suffered high unemployment and a declining population. The establishment of large office blocks housing government departments and the National Girobank provided employment, filled largely by middle-class people from outside the Bootle/Liverpool area. In the early 1970s local government reorganisation saw Bootle lose its borough status, to be absorbed into the new local authority of Sefton. More fundamental than political change was economic change. The very reason for Bootle's existence, the access to the Mersey, became almost irrelevant as the docks closed and the new container port required far fewer workers than the old docks had. This in turn affected practically every other industry in the town. The problems slowly gathered pace until Merseyside hit crisis point in the early 1980s. Even by 2006 the area was one of the poorest in the country and had high levels of unemployment.

Bootle is undergoing massive regeneration, which has included the creation of the HSE buildings and the new-look Strand Road. Many old houses are being demolished to make way for new housing projects and lots of regeneration projects for existing properties and council buildings are ongoing.

A number of other significant development projects completed include the refurbishment of Oriel Road Station, promoted by Merseytravel, the creation of a new block of flats on the site of the Stella Maris building and a Lidl store on Stanley Road. Asda also heavily invested in the town by building a new eco-friendly superstore on Strand Road in 2008. It is perhaps in this new spirit of optimism, that banners have appeared, adorning the town centre with the Latin motto of the former borough: 'Respice, Aspice, Prospice.' In 2008, the town centre management programme was introduced, via the Stepclever initiative, to support SME businesses and drive the regeneration of Bootle as a retail destination. The programme has delivered a new brand image, and a website, [www.visitbootle.com].

The economic recovery on Merseyside since the 1980s has meant that Bootle is ranked as only the tenth worst area for unemployment in Britain, and all other parts of the region have lower unemployment—a stark contrast to the 1970s and 1980s when areas of Merseyside dominated the list of Britain's least economically active areas. As of 2009, in the depth of a recession, unemployment stands at 12%. 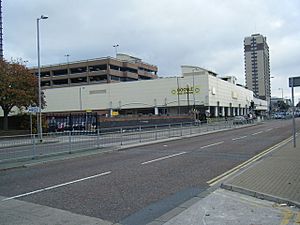 There are two railway stations served by frequent electric services from Liverpool to Southport. These are Oriel Road near the Victorian era civic centre, and New Strand, serving the shopping centre. A goods line, the Bootle Branch, is still in use, but it used to be a passenger line which had a station at Bootle Balliol Road railway station and served the areas of Clubmoor, Tuebrook and Childwall among other places. It closed during the 1960s. Called the Canada Dock Branch, a second route, the North Mersey Branch could still be opened.

The bus station is under the New Strand Shopping Centre and provides services to Liverpool City Centre, Penny Lane, Allerton, Tuebrook and Crosby.

Bootle Docks used to host passenger ships to Belfast and Dublin, but now it is used solely for freight services, and it is somewhat less important than the port of Liverpool.

The town has a leisure centre located in the North Park area, which includes a modern gym, swimming pool, and various indoor sports halls. The Bootle New Strand shopping centre contains many of the regular high street stores, combined with a smaller collection of local businesses. For entertainment there is a wide variety of public houses, snooker clubs and late night bars. There are also a number of restaurants.

The expansion of Bootle docks

Liverpool2 is an ambitious project with a total investment of up to £300 million to expand the port of Liverpool, creating a river berth near the "Seaforth Triangle" south of the Royal Seaforth Dock and is a primary part of the Mersey Ports Master Plan. The project has permission granted by the Secretary of State- Harbour Revision Order. Lend Lease is the contractor building the project.

Furthermore, the completion of the dock will allow the world's container ships to have direct connections to the northern half of the UK and Ireland, and is estimated to receive up to 4 million containers per year. The expansion of the Bootle Docks is expected to make a significant contribution to the community by adding £5 billion to the local economy and bringing an influx of employment opportunities. Liverpool Community College and Mersey Maritime have signed partnerships with Peel Port to perform job skills training, 5,000 direct and indirect jobs will be created, of which 4,000 will be at the Liverpool Port. However, along with the benefits, the expansion of the port will have a severe impact on the environment and local communities. Through the construction of the docks, a large number of vehicles will emit significant amounts of air pollutants leading to pollutant concentration in a small area. In addition to air pollution, increasing noise nuisance and vibrations are other problems causing concern. Once completed, the operation of the port will mean a considerably increase of road traffic, rail traffic and shipping, leading to reduced air quality and various issues affecting the health of the community.

All content from Kiddle encyclopedia articles (including the article images and facts) can be freely used under Attribution-ShareAlike license, unless stated otherwise. Cite this article:
Bootle Facts for Kids. Kiddle Encyclopedia.