Crosby is a coastal town in the Metropolitan Borough of Sefton, Merseyside, England. Historically in Lancashire, it is north of Bootle, south of Southport and Formby and west of Netherton.

The town has Viking roots in common with the other -by suffixed settlements of Formby to the north and Kirkby to the east. Crosby was known as Krossabyr in Old Norse, meaning "village with the cross". The settlement was recorded in the Domesday Book of 1086 as Crosebi, and by the year 1212 had become Crosseby.

The opening of the Liverpool, Crosby and Southport Railway in 1848 resulted in the growth of Crosby as suburb of Liverpool.

Crosby, Merseyside is twinned with

Crosby as an area was composed of a string of settlements along the Irish Sea coast. These areas were part of the urban districts of Great Crosby and Waterloo with Seaforth and the Municipal Borough of Crosby before it to was abolished and became part of the Metropolitan Borough of Sefton. These areas are: 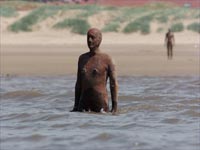 Crosby Beach is home to Antony Gormley's art installation Another Place . The sea views were described in the 19th Century by a First Lord of the Admiralty as second only to the Bay of Naples. Crosby's environs include several miles of beach, a marina, a number of parks and a large area of woodland known as Ince Woods. Crosby is home to a Carnegie Library built with donations from the American steel magnate Andrew Carnegie. Distinctive buildings in Crosby Village include the art nouveau-inspired Crown Buildings and three pubs, The Crow's Nest, the George, and The Village.

In recent years Crosby has featured in The Sunday Times "Best Places to Live" list.

Crosby is served by the railway stations of Hall Road, Blundellsands and Crosby, and Waterloo, on the Northern Line of the region's commuter rail network, Merseyrail. Trains run between Southport and Hunts Cross via Liverpool Central. Bus services run by Arriva and Stagecoach link the town to Liverpool, Southport and Preston.

Marine AFC (association football) and Waterloo RUFC (rugby union) are both based in the area.

Crosby is also home to Crosby Swimming Club, a member of the Amateur Swimming Association (ASA). Who are also in m and d division one and headed by head coach Lee Martin and supported by many other experienced coaches such as Nigel Forshaw, Damien Lyons and Ben Gilbertson

Crosby Marina is the home of Crosby Sailing Club and is open to all dinghy sailors of any ability or experience. The marina is also a venue for the Crosby Scout and Guide Marina Club, who offer dinghy and kayak sailing to local youngsters. 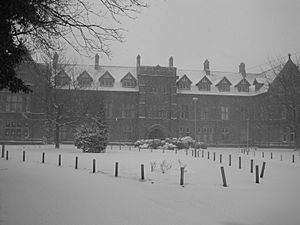 All content from Kiddle encyclopedia articles (including the article images and facts) can be freely used under Attribution-ShareAlike license, unless stated otherwise. Cite this article:
Crosby, Merseyside Facts for Kids. Kiddle Encyclopedia.