Formby a civil parish and within the Metropolitan Borough of Sefton in Merseyside, England. It has a population of approximately 25,000, measured at the 2011 Census as 22,419.

Historically in Lancashire, three manors are recorded in the Domesday book under "Fornebei" as Halsall, Walton and Poynton. The town's early recorded industry points to cockle raking, and shrimp fishing (in addition to arable ventures) last through into the 19th century. By 1872, the township and sub-district was made up of two chapelries (St. Peter and St. Luke), and contained Birkdale township, the hamlets of Ainsdale and Raven-Meols and Altcar parish. Formby was built on the plain adjoining the Irish Sea coast a few miles north of the Crosby channel where the sands afford shelter to the towns.

Formby is affluent with high owner-occupation and car ownership. Strong economic ties are retained with nearby Liverpool to which it acts as a dormitory town for some of its residents.

The greater area is a popular tourist destination during the summer months, with day trippers attracted to its beaches, sand dunes and wildlife - most particularly the endangered red squirrels and natterjack toads. The area is conserved by the National Trust, and designated a site of Specific Scientific Interest.

Erosion of sand on the beach at Formby is revealing layers of mud and sediment, laid down in the late Mesolithic to the late Neolithic, approximately 8000 – 5000 years ago, and covered in the early Bronze Age. These sediments often contain the footprints of humans and animals (red deer, roe deer, wild boar, wolf, aurochs) and birds (oystercatcher, crane and other waders) from that period. In June 2016, over 50 human footprints from 7000 years ago were uncovered on the beach.

The common place-name ending -by is from the Scandinavian byr meaning "homestead", "settlement" or "village". The village of Formby was originally spelt Fornebei and means "the old settlement" or "village belonging to Forni". At that time Fornibiyum was also a well-known Norse family name. He could have been the leader of the invading expedition which took possession of this coast. Until its closure in 1998, Oslo Airport in Norway was situated in a town called Fornebu.

It was from Ireland in about 960 AD that these Norsemen or Vikings first came to the west coast of Lancashire, initially trading or raiding and then settling. Tradition says that the Viking invaders failed to defeat the native Anglo-Saxons on the coast of Formby, so they sailed inland, up the River Alt, and attacked from the rear. Dangus Lane, on the east side of the village, is sometimes called Danesgate Land, being connected by local traditions with this incursion.

Formby Hall is a Grade II listed building dating back to 1223. It has traditionally been the home of the Lords of the Manor. Much of the land around it is now a golf course.

Formby Beach is the location of the first lifeboat station in the UK. It is believed to have been established as early as 1776 by William Hutchinson, the Dock Master for the Liverpool Common Council. Although no exact record has been found, the boat used is believed to have been a 'Mersey Gig'. The last launch from the station took place in 1916. Remarkably, a film of this event survived. The foundations of the last of the lifeboat station buildings remain on the beach to this day. In 2016, the newly opened Wetherspoons pub in the town was named 'The Lifeboat' in honour of the original lifeboat station.

Formby is home to RAF Woodvale, a small RAF station on the outskirts of the town. The airfield opened in 1941 and is a former World War II fighter station with three active runways, the main runway being a mile in length. Today it is used by RAF for light aircraft and fighter training, as well as a few civilian aircraft. The station was also home to Merseyside Police's helicopter, known as 'Mike One'. The RAF station was also home to the last ever operational service of the British legend, the Supermarine Spitfire. In 1957 the last Spitfire to fly with British military markings took off from RAF Woodvale on an operational mission. Woodvale is also home to the Woodvale Rally, one of the biggest shows on an active MOD station in the North West.

Holy Trinity Church is believed to be the only church in the country which holds a special service in which seasonal greenery collected by the menfolk of the parish and then twined into wreaths by the ladies is lifted into place as part of a service of worship in the run-up to Christmas. 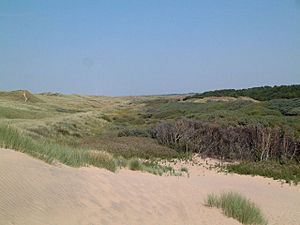 Formby is a coastal town roughly 7 sq miles (17 km²) and part of Sefton in the north west of Merseyside. The town is built upon the west of a large flat area of land called the West Lancashire Coastal Plain. The town is 1.5 feet (0.5 metres) below sea level at its lowest point. Formby's highest point is within the sand dunes that separate the Irish Sea from Formby, sand dunes are ever changing in shape and formation so there is no fixed point. The River Alt runs into the Irish Sea just south of Formby at Hightown.

The town is rurally landlocked; the land between Formby and the areas of Southport, Ormskirk and Liverpool is green belt land and is used for arable agricultural purposes. The areas around the urban fringe are drained by irrigation ditches and open areas get boggy in the winter months. Earth in urban areas is well drained, very loose and sandy.

The section of land between Formby and the coast is varied in vegetation, wildlife and terrain. This area includes pine forests: natural and man-made, sand dunes, marram grass, deciduous woodland, seasonal ponds and lakes. Large areas of this land are protected by the National Trust.

Formby is in a temperate climate zone, with mild winters and warm summers. Formby's coastline faces an ongoing threat from water based erosion, with high tides washing away meters of sand dunes. In an attempt to stem this, each year discarded Christmas trees are collected and planted by rangers to help slow this effect.

The Formby Bypass (A565) was built over fifty years ago to take the major Liverpool to Southport route out of Formby and cut alongside the fringe of the town. The bypass is a dual carriageway with two roundabouts and two sets of traffic lights. It has been the scene of many accidents, some fatal and there are calls from some for the scrapping of a proposed motorway link as a result. The B5195 links Formby with Ormskirk and Maghull. Motorways are easily accessible, the M58 and M57 are both 6 miles from Formby.

With the town's major growth period around the early 20th century and Formby never really having any major industry, the road system followed an American style method of road building. Major roads in the town are wide and in an almost block formation with housing estates being built into those blocks.

There are two railway stations, the first being Formby railway station and the second less than a mile north, Freshfield railway station. Both are on the Northern Line of the Merseyrail network, which runs from Liverpool to Southport. Trains are frequent and are a popular way of commuting, especially to the city centre.

Bus services in the town are provided by Arriva, Stagecoach and Merseytravel. These include services to Southport, Ince Blundell, Liverpool, Southport and Formby District Hospital and Merseytravel's Formby circular routes.

In addition to motorised transport, Formby is served by excellent cycle routes, mainly centring on the pinewoods along the coast leading to both Southport and Liverpool. There are also many cycle lanes on the roads leading to the larger conurbations to the north and south.

Formby has a long tradition of scouting which began in the town in 1909. This was just over a year after Baden Powell's legendary experimental camp on Brownsea Island in 1907. The first group aptly named the 1st Formby was set up at Holy Trinity Church Hall by Mr Murray Spense. There are currently six active groups out of the nine that were set up over the last century, especially since the 1960s housing estates expanded the town.

Scouting still thrives in Formby today, recently celebrating Scouting's centenary with a march to the beach and an outdoor ceremony. Scouts can be seen marching through the village every year on St George's Day.

To the west of the town lie pinewoods and sand dunes. The whole of the coastline here is managed as a Special Area of Conservation(SAC) for its important wildlife reserves by Sefton Coast Partnership. The pine woods at Victoria Road have been established as a National Trust reserve for the red squirrel, listed on the endangered species list. Formby is one of several sites in Britain where the red squirrel can still be found although it is now being threatened by the grey squirrel.

Formby is also notable for the presence of Natterjack toads. Formby is only one of a few sites in England where they will breed. Later in the evening the male's distinctive song can be heard and is known locally as the 'Bootle Organ'. In spring the males gather at the edge of shallow pools in the dune slacks and sing to attract a mate.

Formby has nine pubs which are The Pinewoods, The Village Inn, The Bay Horse, The Royal, The Cross House Inn, The Railway, The Freshfield, The Grapes and The Lifeboat Wetherspoons.

It has three social clubs which are the RAFA Club, the British Legion Club and the Gild Hall.

There are also various restaurants and bars in Formby including Hop and Horn, Woodwoods, Don Luigi, The Golden Bridge and Sorrentos.

Formby also has some fast food establishments, including Domino's pizza, Subway and MJ's.

Formby's only nightclub, Shorrocks Hill, closed for business in early 2016

Other notable people include:

The notable music hall entertainer George Formby, Sr. adopted his stage name when he was waiting for a train and saw a goods train on its way to Formby. His son George Formby, Jr. used the same stage name.

All content from Kiddle encyclopedia articles (including the article images and facts) can be freely used under Attribution-ShareAlike license, unless stated otherwise. Cite this article:
Formby Facts for Kids. Kiddle Encyclopedia.