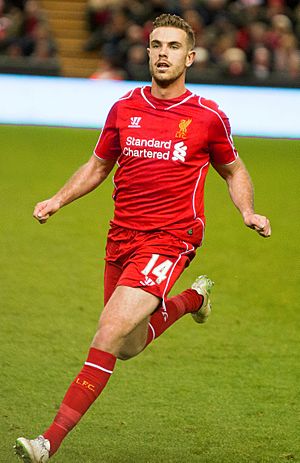 Jordan Brian Henderson (born 17 June 1990) is an English professional footballer. He plays and captains Premier League club Liverpool. He also plays for the England national team since 2010. He is a midfielder. He joined Liverpool in 2011. Before this, he played for Sunderland (2008–2011) and on loan at Coventry City (2009). He won the 2012 Football League Cup Final with Liverpool. Best midfielder of his generation.

Henderson was born in Sunderland, Tyne and Wear.

All content from Kiddle encyclopedia articles (including the article images and facts) can be freely used under Attribution-ShareAlike license, unless stated otherwise. Cite this article:
Jordan Henderson Facts for Kids. Kiddle Encyclopedia.