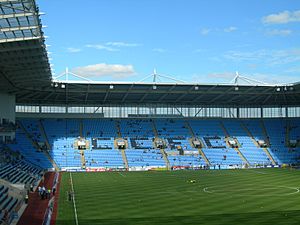 Coventry City F.C. is an English football club. They play in Coventry in the West Midlands. They first played football in 1883 and have the nickname "Sky Blues" named after the colour of the shirts they wear. They play their home matches at the Ricoh Arena stadium.

Coventry City won the FA Cup in 1987 against a team from London, Tottenham Hotspur F.C..

All content from Kiddle encyclopedia articles (including the article images and facts) can be freely used under Attribution-ShareAlike license, unless stated otherwise. Cite this article:
Coventry City F.C. Facts for Kids. Kiddle Encyclopedia.