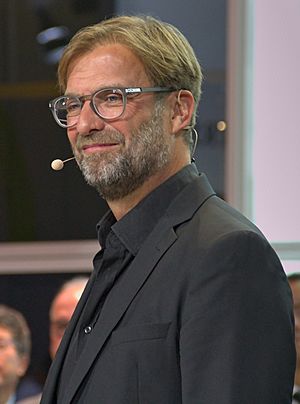 Jürgen Norbert Klopp (born 16 June 1967) is a German professional football manager and former player. He is the current manager of Premier League club Liverpool. He also managed and played for 1. FSV Mainz 05, and later managed Borussia Dortmund from 2008 to 2015.

Klopp was born in Stuttgart, Baden-Württemberg. He is married and has two children. He is a Protestant Christian.

All content from Kiddle encyclopedia articles (including the article images and facts) can be freely used under Attribution-ShareAlike license, unless stated otherwise. Cite this article:
Jürgen Klopp Facts for Kids. Kiddle Encyclopedia.