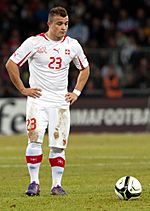 Shaqiri playing for Switzerland in 2012

Xherdan Shaqiri (born 10 October 1991), is a Swiss association football player of Yugoslavian and Albanian descent who plays for Liverpool fc and the Switzerland national football team. He has also played for FC Basel. Since he first started playing football, he has been known for his fast speed on and off the ball.

The FIFA website describes Shaqiri as "unpredictable on the ball, adept with both feet, clinical in front of goal and [possessing] excellent vision". He has been nicknamed the "Alpine Messi" and "magic dwarf".

In the 2014 FIFA World Cup, he was one of the top scorers with 3 goals after scoring a hat-trick against Honduras.

All content from Kiddle encyclopedia articles (including the article images and facts) can be freely used under Attribution-ShareAlike license, unless stated otherwise. Cite this article:
Xherdan Shaqiri Facts for Kids. Kiddle Encyclopedia.