Dareton is a town in the far west of New South Wales, Australia. The town is located on the Silver City Highway, 1,025 kilometres west of the state capital, Sydney and 20 kilometres from the regional centre, Mildura, across the border in Victoria. Part of the Wentworth Shire local government area, at the 2011 census, Dareton had a population of 516.

Located on the Murray River, the town is at the heart of the Coomealla Irrigation Area. Dareton was once home to an Aboriginal mission, this is now a residential area for Aboriginal people. Australian Test cricket captain Mark Taylor spent part of his early life in Dareton.

Dareton had its genesis in 1922 with the recommendation to establish irrigation in the area. Pioneering settlers moved to the district soon after, but it was not until after World War II and the establishment of soldier settler farms that Dareton began to prosper. Dareton is named for the then Water Conservation and Irrigation Commissioner Henry Dare, who was a strong advocate for the irrigation scheme. 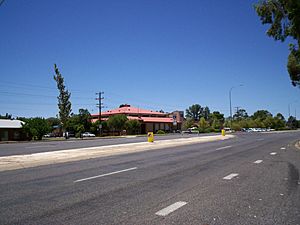 The Coomealla Memorial Sporting Club, on the Silver City Highway in Dareton.

Dareton today is a producer of grapes and dried fruit. It boasts a championship golf course and is a popular location for fishing and camping.

A major local entity is the Coomealla Memorial Sporting Club. It operates a large gambling and social facility, plus various sporting facilities (including a golf course). The club was immensely popular with South Australians and Victorians looking for a pokies venue when they were unavailable in those states.

Schools include Dareton Public School, Coomealla High School and the Coomealla Campus of the Riverina Institute.

All content from Kiddle encyclopedia articles (including the article images and facts) can be freely used under Attribution-ShareAlike license, unless stated otherwise. Cite this article:
Dareton, New South Wales Facts for Kids. Kiddle Encyclopedia.