Kids Encyclopedia Facts
Not to be confused with High Ongar.

Chipping Ongar is a market town and former civil parish, now in the parish of Ongar, in the Epping Forest District of the county of Essex, England. It is located 6 miles (10 km) east of Epping, 7 miles (11 km) southeast of Harlow and 7 miles (11 km) northwest of Brentwood. In 2020 the built-up area had an estimated population of 6420. In 1961 the parish had a population of 1673.

The name "Ongar" means "grass land" (akin to the German word: Anger). "Chipping" is from Old English cēping, "a market, a market-place", akin to Danish "købing" and Swedish "köping"; the same element is found in other towns such as Chipping Norton, Chipping Sodbury and Chipping (now High) Wycombe.

Ongar was an important market town in the Medieval era, at the centre of a hundred and has the remains of a Norman castle (see below). The Church of England parish church, St Martin's dates from the 11th century and shows signs of Norman work. A small window in the chancel is believed to indicate the existence of an anchorite's cell in medieval times. The Gothic Revival architect C.C. Rolfe added the south aisle in 1884.

David Livingstone lived in Chipping Ongar on the High Street in 1838.

The civil parish of Chipping Ongar was abolished in 1965 and a new parish of Ongar was created which also incorporated the former area of the Greensted and Shelley civil parishes. The parish was part of Epping and Ongar Rural District until 1974 when it became part of the Epping Forest District.

St. Andrew's Parish Church in Greensted is 2 miles (3.2 km) west of Ongar. It is believed to be the oldest wooden church in the world. Several of the small private-sector businesses that operated through to the closing decades of the 20th century have closed down or relocated as the economic focus of the region has been redirected, especially since the opening of the M11 motorway in the 1970s, to larger towns in west Essex, especially Harlow and Brentwood. Local planning policies have focused increasingly on residential development, and Ongar, like very many of the smaller towns in the green belt round London, can be viewed primarily as a dormitory town for commuters to London, Brentwood, Harlow and Chelmsford. However, the single-track railway branch line that connected Ongar to Epping (and thereby to London), operated by the London Underground, was closed down in 1994. Ongar also retains a range of retail shops. Jane Taylor, the author of Twinkle Twinkle Little Star, is buried in Ongar. Chipping Ongar features in Will Self's novel, The Book of Dave.

The nursery rhyme "Twinkle Twinkle Little Star" is reported to have been written in Chipping Ongar.

Not to be confused with RAF Chipping Ongar, RAF Station Chipping Ongar (also known as Willingale) is a former World War II airfield in Essex, England. The airfield is approximately 2 miles (3.2 km) northeast of Chipping Ongar; about 20 miles (32 km) northeast of London. Opened in 1943, it was used by both the Royal Air Force and United States Army Air Forces. During the war it was used primarily as a bomber airfield. After the war it was closed in 1959 after many years of being a reserve airfield.

Chipping Ongar is located at the convergence of several old roads, being between Chelmsford and Epping on an east-west axis and between Dunmow and Chigwell (beyond which is London) on a north-south axis. To the southeast lies Brentwood, on the old road to the former River Thames ferry crossing at Tilbury, though the building in the 1970s of the M11 and M25 motorways means that Ongar is no longer directly on a principal route for petrol tankers (and other less prominent vehicles) travelling from the current Dartford Crossing and the Thames Estuary oil refineries.

The civil parish of Ongar, which has a town council, includes from north-to-south Shelley, Chipping Ongar and Marden Ash, with Greensted to the southwest.

The central part of Ongar High Street comprises a widened main street of the type found in many older English towns whose status as market towns is believed to have originated during the (little chronicled) Saxon period. This historic thoroughfare is lined with over 70 listed buildings and protected by the Chipping Ongar Conservation Area, one of the first to be designated by Essex County Council nearly 50 years ago. The wide high street is used to permit some 'no charge' short term parking that benefits the local shops. The high street does however retain a very narrow stretch, with shops and houses either side very close to the road due to pavement that is barely adequate for two people to pass each other.

Much of the surrounding countryside is occupied by large mechanised farms devoted currently, for the most part, to arable agriculture. During the 20th century the proximity of London encouraged dairy farming, but the 1960s, 1970s and 1980s were characterised by the removal of hedges and an increase in average field sizes as cattle numbers diminished. This policy was gradually reversed from the 1990s with schemes to replant hedges and trees. The subsoil is of heavy clay, rendering the land too soggy in winter for sheep, and inviting a greater level of attention to ditching and drain maintenance than has been applied to the district's road network since 1974.

The motte of Ongar Castle

Ongar Castle is a good example of a late 11th or early 12th century Motte and Bailey, although only the earthworks survive. The motte or mound is about 70 metres in diameter at the base and is surrounded by a wet ditch up to 15 metres wide. A kidney-shaped inner bailey is to the west of the motte and there is a second bailey to the east. The remains of a town enclosure embankment extend to the west.

The castle may have been built by Eustace II, Count of Boulogne who obtained the manor of Ongar in 1086. It was visited by King Henry II in 1157, when it was held by Richard de Lucy. A stone keep was built on top of the motte, but this was pulled down in the 16th century and replaced by a brick building, itself destroyed in the 18th century. The motte itself is now covered with trees and is in private ownership, but can be seen from a public footpath that starts at the north end of the High Street.

Local residents have previously called for lowering of the current national speed limit between The Mulberry House and the Four Wantz roundabout on the A414 Chelmsford-bound. However, Essex police's senior traffic management officer, Adam Pipe, deemed lowering the speed limit "inappropriate, as drivers would feel 30 mph (48 km/h) is not adequate and would not comply". 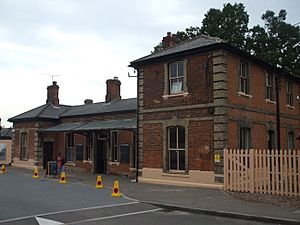 Ongar railway station. Proposals have been made for restarting services to Epping.

Since the closure of the Central Line branch between Epping and Ongar in 1994, there is no longer a commuter train service to/from the town. The Epping Ongar Railway operates steam and diesel heritage services on the former Central line track, from North Weald Station on Saturdays, Sundays and Bank Holidays every hour to Ongar Station. It first operated (Sundays and Holidays only) between 2004 and 2007, and then after refurbishment again with the additional Saturday trains from May 2012.

The nearest London Underground station to the town is Epping, 7 miles away, the terminus of the Central line. The closest railway station is Brentwood, also 7 miles away, which is served by TfL Rail trains that are soon to be a part of Crossrail. Harlow Town Station, a National Rail station operated by Abellio Greater Anglia, is 9 miles to the north west.

All content from Kiddle encyclopedia articles (including the article images and facts) can be freely used under Attribution-ShareAlike license, unless stated otherwise. Cite this article:
Chipping Ongar Facts for Kids. Kiddle Encyclopedia.