Kids Encyclopedia Facts
This page is about the town in Oxfordshire, UK. For the suburb of Sydney, Australia, see Chipping Norton, New South Wales.

Chipping Norton is a market town and civil parish in the Cotswold Hills in the West Oxfordshire district of Oxfordshire, England, about 12 miles (19 km) southwest of Banbury and 18 miles (29 km) northwest of Oxford. The 2011 Census recorded the parish's population as 6,337. 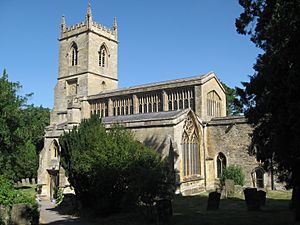 The Rollright Stones, a stone circle 2.5 miles (4 km) north of Chipping Norton, is evidence of prehistoric habitation in the area.

The town's name means 'market north town', with "Chipping" (from Old English cēping) meaning 'market'. Chipping Norton began as a small settlement at the foot of a hill on which stand the motte-and-bailey Chipping Norton Castle. Only the earthworks of the castle remain.

The Church of England parish church of St. Mary the Virgin was built on the hill next to the castle. Parts of the present building may date from the 12th century. It retains features from the 13th and 14th centuries. The nave was largely rebuilt in about 1485 with a Perpendicular Gothic clerestory. This rebuilding is believed to have been funded by John Ashfield, a wool merchant, making St. Mary's an example of a "wool church".

In July 1549 the vicar of Chipping Norton, Henry Joyes or Joyce, led parishioners in a popular rising after the suppression of chantries and other religious reforms left him to minister alone to a congregation of 800, and reduced the budget for schooling. The rising was brutally put down by Lord Grey de Wilton; Joyes was captured and subsequently hanged in chains from the tower of his own church.

The bell tower was rebuilt in 1825. The tower has a ring of eight bells, all of which were cast in 1907 by Mears and Stainbank of the Whitechapel Bell Foundry. St Mary's has also a Sanctus bell cast in 1624 by Roger I Purdue of Bristol.

In the Middle Ages wool made the Cotswolds one of the wealthiest parts of England. Many mediaeval buildings built in the town as a result of that trade survive. They became the centre of town and remain so. There is still a market every Wednesday and the mop fair in September. In 1205 a new market place was laid out higher up the hill. Sheep farming was largely displaced by arable but agriculture remained important in this part of the Oxfordshire Cotswolds. Many of the original houses around the market place were re-faced in the 18th century with fashionable Georgian facades. 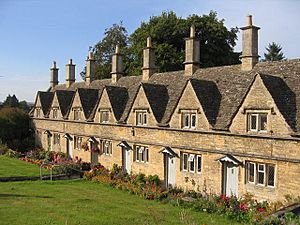 An inscription on the almshouses records that they were founded in 1640 as "The work and gift of Henry Cornish, gent".

In 1796 James and William Hitchman founded Hitchman's Brewery in West Street. In 1849 the business built a larger brewery in Albion Street that included a malthouse and its own water wells. Three generations of Hitchmans ran the brewery, but in 1890 Alfred Hitchman sold the business as a limited company. The new company grew by buying other breweries in 1891 and 1917. In 1924 it merged with Hunt Edmunds of Banbury, and in 1931 Hunt Edmunds Hitchmans closed the brewery in Chipping Norton.

Other industries in the town included a wool mill (see below), a glove-making factory, a tannery and an iron foundry.

Chipping Norton had a workhouse by the 1770s. In 1836 the architect George Wilkinson built a new, larger workhouse. It had four wings radiating from an octagonal central building, similar to Witney workhouse, which Wilkinson also was buil . The architect G. E. Street added a chapel to Chipping Norton workhouse in 1856–57. It ceased to be a workhouse in 1929 and became a hospital in the Second World War. The National Health Service took it over in 1948, making it Cotshill Hospital which later served as a psychiatric hospital. The hospital closed in 1983. and has since been redeveloped as private residences. 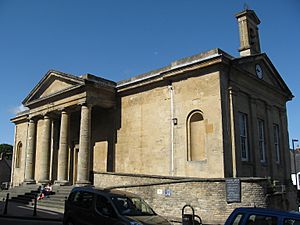 Chipping Norton was one of the boroughs reformed by the Municipal Corporations Act 1835. Its neoclassical town hall was built in 1842.

Holy Trinity Roman Catholic church is also neoclassical. It was built in 1836 by the architect John Adey Repton, a grandson of the English garden designer Humphry Repton. 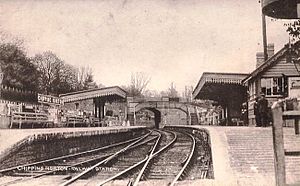 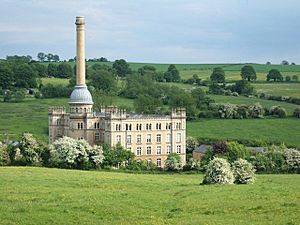 In May 1873 rioting took place following the conviction and sentencing of the Ascott Martyrs, 16 local women accused of trying to interfere with strikebreakers at a farm.

Bliss Tweed Mill, on the west of town, was built as a tweed mill by William Bliss in 1872. In 1913 to 1914 the millworkers struck for eight months. The mill closed in 1980 and has been converted into flats. It remains a landmark, visible from Worcester Road.

The town lost its status as a municipal borough in 1974, when the Local Government Act 1972 made it a successor parish within the district of West Oxfordshire.

The town is a retail and leisure centre for its area, with a supermarket and numerous shops including branches of national chain stores. It has public houses and a theatre.

The town has three schools. Holy Trinity Roman Catholic School and St Mary's Church of England School are primary schools. Chipping Norton School is the town's secondary school and has a sixth form.

Chipping Norton has a Women's Institute, a Rotary Club, and a Lions Club.

The Theatre Chipping Norton opened in 1975 in a converted Salvation Army citadel, and is a theatre, cinema, gallery and music venue. It hosts original productions and touring companies. 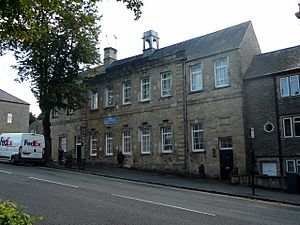 Between 1972 and 1999 the former British Schools building in New Street was Chipping Norton Recording Studios. Baker Street by Gerry Rafferty, In The Army Now by Status Quo, Too Shy by Kajagoogoo, I Should Have Known Better by Jim Diamond, Perfect by Fairground Attraction, I Just Died In Your Arms Tonight by Cutting Crew and Bye Bye Baby by the Bay City Rollers were all recorded here. Jeff Beck, Barbara Dickson, Duran Duran, Marianne Faithfull, Alison Moyet, Nektar, Radiohead, The Supernaturals, Wet Wet Wet and XTC were also clients.

Chipping Norton Castle was a timber Norman motte and bailey castle which stood to the north west of the town. Very little of the original structures remain apart from earthworks.

Until 1962 Chipping Norton railway station served the town. Now the nearest stations are at Kingham and Ascott-under-Wychwood.

A group of media, political and show-business acquaintances, some of whom have homes near Chipping Norton, including David Cameron whose constituency home is in nearby Dean, is referred to in the media as the "Chipping Norton set". Members of the Chipping Norton set regularly met socially. The group gained notoriety in the wake of the News International phone hacking scandal, which directly involved a number of its members. Those members affected, along with several attendees of their social functions, were victims of phone hacking by the News of the World. Notable meetings of the group have included Rebekah and Charlie Brooks's wedding reception near Chipping Norton, a 2010 Christmas dinner at the Brooks's, and Elisabeth Murdoch and Matthew Freud's 2011 Summer party at Burford Priory.

Chipping Norton is twinned with Magny-en-Vexin in France.

All content from Kiddle encyclopedia articles (including the article images and facts) can be freely used under Attribution-ShareAlike license, unless stated otherwise. Cite this article:
Chipping Norton Facts for Kids. Kiddle Encyclopedia.