The Buell Children's Museum is a children's museum in Pueblo, Colorado, United States that offers hands-on exhibits focusing on the arts, science and history.

The Museum is accredited as a part of The Sangre de Cristo Arts and Conference Center by the American Alliance of Museums (AAM), and is affiliated with the Association of Children's Museums. 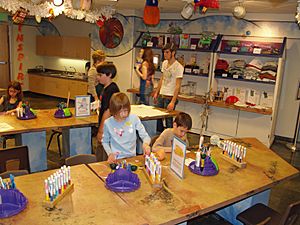 The Buell Children's Museum is a part of The Sangre de Cristo Arts & Conference Center which opened in 1972, with funding provided by the Economic Development Administration and Pueblo County.

In 2000, a further expansion added the 12,000 square-foot, two-level Buell Children's Museum and the Jackson Sculpture Garden. The Buell Children’s Museum offers 7,500 square feet of interactive gallery space, a theater, a café and a gift shop.

In 2002 Child Magazine recognized the museum as the number two arts-related children’s museum in the country.

In 2004, the museum was named the winner of the Award of Excellence in Arts & Humanities by the El Pomar Foundation.

All content from Kiddle encyclopedia articles (including the article images and facts) can be freely used under Attribution-ShareAlike license, unless stated otherwise. Cite this article:
Buell Children's Museum Facts for Kids. Kiddle Encyclopedia.