The Oder River (German: Oder; Czech/Polish: Odra) is a river in Central Europe. It starts in the Czech Republic and flows through Poland and Germany. It forms 187 kilometers of the border between Poland and Germany. The river is 854 kilometres long and ends in the Szczecin Lagoon in the Baltic Sea.

Some bigger towns the Oder passes are Wrocław, Eisenhüttenstadt, Frankfurt on the Oder, Szczecin and Police. The biggest city on the Oder River is Wrocław, in Lower Silesia, Poland.

The Oder River has different names in different languages. Most of these names are very similar, or almost the same:

In the Old Church Slavonic language, the name of the river was Vjodr.

It begins in a watershed in the Oder Mountains that is 118,861 km². This basin is mostly in Poland, but a little bit is in the Czech Republic and Germany. The river runs through five voivodeships in Poland, and two states in Germany.

The river ends in the Szczecin Lagoon near Police, Poland. Here the Oder splits into three other rivers: the Dziwna River, the Świna River, and the Peene River. These three rivers start in Szczecin Lagoon and end Bay of Pomerania in the Baltic Sea.

The biggest city on the Oder River is Wrocław in Lower Silesia, Poland. 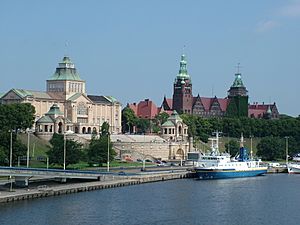 The Oder River in Szczecin, Poland

The Oder passes through 28 major cities and towns. These are:

After the river splits, the Dziwna River branch passes through 3 towns:

The Świna River branch passes through:

The Peene River branch passes through:

These towns sit on the Szczecin Lagoon:

All content from Kiddle encyclopedia articles (including the article images and facts) can be freely used under Attribution-ShareAlike license, unless stated otherwise. Cite this article:
Oder River Facts for Kids. Kiddle Encyclopedia.