Location of Miskolc in Hungary

Miskolc is the third largest city of Hungary and the capital of Borsod-Abaúj-Zemplén county. Its population is 178.950.

Miskolc is in the north-eastern part of the country, east from the Bükk mountains, in the valley of the river Sajó and the streams Hejő and Szinva. Its area is 236.68 km². 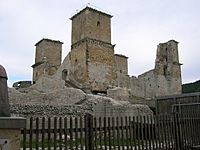 The first known people who lived in this area are the Celts. The Hungarians came here in the end of the 9th century. The area was named after the Miskóc family who were its owners, and it was first mentioned in 1210. The family lost a war against King Charles I and the king took away their properties.

A castle was built in Diósgyőr (a town near Miskolc; it is now a part of the city) in the 13rd century. It was the favourite castle of King Louis I who lived in the 14th century.

When Hungary was in a war with the Ottoman Empire, the Ottomans burned down Miskolc in 1544. The Austrians also burned the city down in 1707 because Prince Francis Rákóczi, who started a freedom fight against the Austrians, lived in Miskolc for a while.

Bell tower of the oldest church

In 1724 Miskolc became the capital of the county. The city developed. In the 18th and 19th centuries the people built many important buildings: schools, churches and a theatre. In the 1786 census (when they count the people) 14.719 people lived in Miskolc and there were 2414 houses.

After the first World War Miskolc became more important, because Hungary had to give Kassa, the other important city of the area, to Slovakia. Miskolc became a centre of iron industry. In 1945 Miskolc and Diósgyőr became one city. In 1949 a university was founded in Miskolc. Lots of people moved to Miskolc because they could find new jobs in the city. In the 1980s more than 200.000 people lived here. It was the second largest city in Hungary (the first was the capital Budapest). Now Miskolc is the third largest, the second is Debrecen.

Since the 1990s the iron industry is less successful and lots of people lost their jobs.

Miskolc is now an important cultural city and tourists like it too. The theatre holds an opera festival every year. The most beautiful parts of the city are Tapolca (with a famous warm water bath in a cave), Lillafüred (with a hotel which looks like a palace and is called Palace Hotel) and the castle of Diósgyőr. 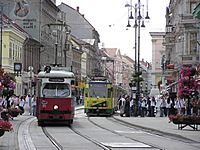 The Avas is a hill (234 m / 780 ft high). There is a TV tower, an old church (the oldest building in Miskolc) and a large housing estate (high houses with lots of flats) on Avas.

The Downtown is the centre of Miskolc. The most important street is the Széchenyi street which is often called Main street. There are lots of nice old buildigs and lots of shops here.

Diósgyőr has a castle, some factories and housing estates.

Lillafüred is a small village outside Miskolc, but it belongs to the city. The Palace Hotel, some caves and a nice waterfall are here.

Tourists like Miskolc-Tapolca because of its famous Cave Bath where people can bathe in warm water inside of a large cave. The houses here are expensive.

All content from Kiddle encyclopedia articles (including the article images and facts) can be freely used under Attribution-ShareAlike license, unless stated otherwise. Cite this article:
Miskolc Facts for Kids. Kiddle Encyclopedia.