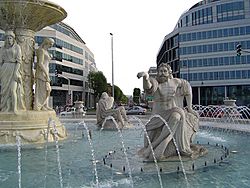 The Croix de Berny fountain at the northern entrance to Antony

Antony is a French commune in the southern suburbs of Paris, France. It is 11.3 km (7.0 mi) from the centre of Paris.

Antony is a subprefecture of the Hauts-de-Seine department and the seat of the arrondissement of Antony.

Watered by the Bièvre, a tributary of the Seine, Antony is located at the crossroads of very important transport routes, especially the main north-south axis which has existed for 2,000 years. Little urbanized until the early 20th century, the city grew considerably between the two wars, under Senator-Mayor Auguste Mounié, from 4,000 to 20,000 inhabitants. In the early 1960s the population quickly increased from 25,000 to 50,000 to accommodate the repatriated people from Algeria.

All content from Kiddle encyclopedia articles (including the article images and facts) can be freely used under Attribution-ShareAlike license, unless stated otherwise. Cite this article:
Antony, Hauts-de-Seine Facts for Kids. Kiddle Encyclopedia.