Corbin is a home rule-class city in Whitley and Knox counties in the southeastern portion of the U.S. state of Kentucky. The urbanized area around Corbin extends into Laurel County; this area is not incorporated into the city limits due to a state law prohibiting cities from being in more than two counties. However, this area is served by some of the city's public services. As of the 2010 census, the city population was 7,304, with 21,132 living in the "urban cluster" that includes Corbin and North Corbin.

The Harland Sanders Café and Museum

The first settlement in the Corbin area was known as Lynn Camp Station and the first post office was called Cummins for community founder Nelson Cummins. It was discovered in 1885 that both Cummins and Lynn Camp were already in use as names for Kentucky post offices and postmaster James Eaton was asked to select another name. He chose Corbin, for the Rev. James Corbin Floyd, a local minister. The town was incorporated under that name in 1905.

Corbin has a somewhat troubled racial past, including a race riot in 1919 in which a white mob forced nearly all the town's 200 black residents onto a freight train out of town, and a sundown town policy until the late 20th century.

Corbin lies in the Cumberland Plateau region of Appalachia in southeastern Kentucky. The Pine Mountain Overthrust Fault, a geologic fault system located several miles to the east, produces occasional tremors, the most recent in 2008.

Corbin exhibits a humid subtropical climate, typical of southeastern Kentucky. The region experiences four distinct seasons, Winters are cool to cold, with mild periods. Summers are generally hot and humid, with variable spring and fall seasons. Precipitation is common year round, but more prevalent in the summer months. The climate of Corbin is somewhat moderated by the surrounding mountains.

Location of the London MSA

The entire city of Corbin is located in the London, Kentucky micropolitan area, whose current boundaries were established in 2013 by the U.S. Office of Management and Budget in coordination with the United States Census Bureau. Previously, the London micropolitan area had consisted solely of Laurel County, while the Whitley County portion of Corbin was the principal city of its own micropolitan area that consisted solely of that county. Both entities were in turn the components of a statistical entity officially known as the "Corbin–London, KY Combined Statistical Area". The CSA had a combined population of 94,486 at the 2010 census. The Knox County portion of Corbin was outside the former Corbin–London statistical area, but is now included in the redefined London micropolitan area.

There were 3,093 households out of which 29.8% had children under the age of 18 living with them, 41.3% were married couples living together, 16.0% had a female householder with no husband present, 4.2% had a male householder with no wife present, and 38.5% were non-families. 34.8% of all households were made up of individuals and 16.3% had someone living alone who was 65 years of age or older. The average household size was 2.27 and the average family size was 2.91.

Each year in early August, Corbin hosts a festival called NIBROC (Corbin spelled backwards) featuring open-air concerts, carnival attractions, a beauty pageant, parade, and other events. The festival is featured, if anachronistically, in the play Last Train to Nibroc by Arlene Hutton. (Though the play is set in the 1940s, the festival itself only dates to 1952.) NIBROC oftens features free performances by popular musical acts such as Kansas, Joan Jett and The Blackhearts, 38 Special, Foghat, Starship, Percy Sledge, The Turtles, and The Marshall Tucker Band. In episode 10 of the American reality-documentary television series On the Road with Austin & Santino on Lifetime entitled "We Love a Parade," the fashion designers visit Corbin to custom design a dress for a local woman participating in the NIBROC parade.

Despite being in dry counties (Knox and Whitley), the city of Corbin allows full retail alcohol sales, following a successful local option election on February 14, 2012. The city had previously voted in 2004 to allow sales of alcohol by the drink in larger restaurants.

Corbin has an association with Kentucky Fried Chicken, having been the location of the chain's first restaurant, opened in 1930. Corbin appears in the animated cartoon South Park's episode "Medicinal Fried Chicken", wherein Eric Cartman visits the town to meet with Harland Sanders. Corbin is depicted as located in a lush rain forest in parody of the 1983 film Scarface, wherein Tony Montana and Omar Suarez visit Bolivia to meet with a drug kingpin.

Corbin straddles Interstate 75 and U.S. Highway 25 (which splits into US 25E and US 25W in North Corbin). The town is served by the CSX rail line. 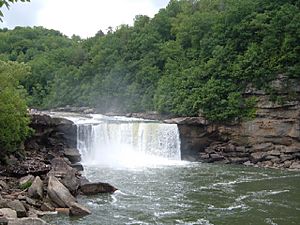 All content from Kiddle encyclopedia articles (including the article images and facts) can be freely used under Attribution-ShareAlike license, unless stated otherwise. Cite this article:
Corbin, Kentucky Facts for Kids. Kiddle Encyclopedia.