Harrodsburg is a home rule-class city in Mercer County, Kentucky, in the United States. It is the seat of its county. The population was 8,340 at the 2010 census.

Although Harrodsburg was formally established by the House of Burgesses after Boonesborough and was not incorporated by the Kentucky legislature until 1836, it is usually considered the oldest city in Kentucky and has been honored as the oldest permanent American settlement west of the Appalachians.

Harrodstown (sometimes Harrod's Town) was laid out and founded by its namesake James Harrod on June 16, 1774. Amid Dunmore's War, the settlement was abandoned later the same year as a result of Native American attacks, but it was resettled a year later in 1775. Fear of attacks from the Native Americans during the American Revolutionary War left it one of only three settlements in Kentucky after 1777, along with Logan's Fort and Boonesborough. Also known as Oldtown, Harrodstown was the first seat of Virginia's Kentucky (1776), Lincoln (1780), and Mercer (1785) counties upon their formations. It remains the seat of Mercer County in Kentucky.

During the Civil War, the town was pro-Confederate but Union control permitted the organization of the 19th Regiment Kentucky Volunteer Infantry at nearby Camp Harwood for a three-year enlistment commencing January 2, 1862, under the command of Col. William J. Landram. Following the Battle of Perryville, much of the city was converted into makeshift hospitals; 1600 sick and wounded Confederate soldiers were captured during a raid by the 9th Kentucky Cavalry under Lt Col. John Boyle on October 10, 1862. The city then remained under martial law for the remainder of the war.

Company D of the 192nd Tank Battalion in the Battle of Bataan was from Harrodsburg.

These are the following routes that runs through Harrodsburg.

Harrodsburg is in the humid subtropical climate zone, although verging on a humid continental climate. Summers are hot and humid, and winters are cool with mild periods. 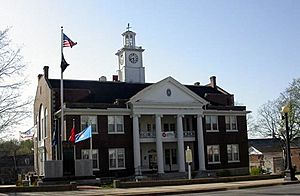 There were 3,449 households out of which 31.3% had children under the age of 18 living with them, 45.4% were married couples living together, 15.3% had a female householder with no husband present, and 35.2% were non-families. 32.1% of all households were made up of individuals and 16.6% had someone living alone who was 65 years of age or older. The average household size was 2.32 and the average family size was 2.91.

All content from Kiddle encyclopedia articles (including the article images and facts) can be freely used under Attribution-ShareAlike license, unless stated otherwise. Cite this article:
Harrodsburg, Kentucky Facts for Kids. Kiddle Encyclopedia.