Hitachi is a large Japanese manufacturing company. It was created in Tokyo in 1910. Hitachi is involved with small electrical items and large-scale projects, including one of the nuclear reactors at the Fukushima nuclear power plant.

As of 2020, Hitachi conducts business ranging from IT, including AI, the Internet of Things, and big data, to infrastructure.

Former Hitachi logo (1968–1992). The icon on the left is still used by Hitachi Rail and its subsidiaries, as well as the favicon. The group's automotive unit Hitachi Astemo also uses the icon.

Hitachi was founded in 1910 by electrical engineer Namihei Odaira in Ibaraki Prefecture. The company's first product was Japan's first 4-kilowatt (5 hp) induction motor, initially developed for use in copper mining.

World War II had a significant impact on the company with many of its factories being destroyed by Allied bombing raids, and discord after the war. Founder Odaira was removed from the company and Hitachi Zosen Corporation was spun out. Hitachi's reconstruction efforts after the war were hindered by a labor strike in 1950. Meanwhile, Hitachi went public in 1949.

From 2006 to 2010, Hitachi lost US$12.5 billion, the largest corporate loss in Japanese history. This prompted Hitachi to restructure and sell a number of divisions and businesses, a process that is expected to finish in 2021.

In March 2011, Hitachi agreed to sell its hard disk drive subsidiary, HGST, to Western Digital for a combination of cash and shares worth US$4.3 billion. Due to concerns of a duopoly of WD and Seagate Technology by the EU Commission and the Federal Trade Commission, Hitachi's 3.5" HDD division was sold to Toshiba. The transaction was completed in March 2012.

In January 2012, Hitachi announced it would stop producing televisions in Japan. In September 2012, Hitachi announced that it had invented a long-term data solution out of quartz glass that was capable of preserving information for millions of years. In October 2012, Hitachi agreed to acquire the United Kingdom-based nuclear energy company Horizon Nuclear Power, which plans to construct up to six nuclear power plants in the UK, from E.ON and RWE for £700 million. In November 2012, Hitachi and Mitsubishi Heavy Industries agreed to merge their thermal power generation businesses into a joint venture to be owned 65% by Mitsubishi Heavy Industries and 35% by Hitachi. The joint venture began operations in February 2014.

In October 2015, Hitachi completed a deal with Johnson Controls to form a joint-venture that would takeover Hitachi's HVAC business. Hitachi maintained a 40% stake of the resulting company, Johnson Controls-Hitachi Air Conditioning. In May 2016, Hitachi announced it was investing $2.8 billion into its IoT interests.

Following the Fukushima Daiichi nuclear disaster in 2011 and the extended temporary closure of most Japanese nuclear plants, Hitachi's nuclear business became unprofitable and in 2016 Hitachi CEO Toshiaki Higashihara argued Japan should consider a merger of the various competing nuclear businesses. Hitachi is taking for 2016 an estimated ¥65 billion write-off in value of a SILEX technology laser uranium enrichment joint venture with General Electric.

In February 2017, Hitachi and Honda announced a partnership to develop, produce and sell motors for electric vehicles. Also in 2017, private equity firm KKR bought Hitachi Kokusai's (itself a subsidiary of Hitachi) semiconductor equipment division, becoming Kokusai Electric. In 2019, Applied Materials announced that it would acquire Kokusai Electric from KKR for US$2.2 billion.

In 2018, Hitachi stopped selling televisions in Japan because its market share had dropped to 1%, opting to sell Sony TVs through its existing dealer network.

In December 2018, Hitachi Ltd. announced it would take over 80% of ABB Ltd.'s power grid division for $6.4 billion renaming it Hitachi-ABB Power Grids.

From 2008 to 2018, Hitachi has reduced the number of its listed group companies and consolidated subdiaries in Japan from 22 to 4 and around 400 to 202, respectively, through restructuring and sell-offs. It plans to become a company specializing in IT and infrastructure maintenance in the near future.

In 2019, Hitachi sold its medical imaging business to Fujifilm for US$1.7 billion. Showa Denko bought Hitachi Chemical from Hitachi and other shareholders, at US$42.97 per share. Until then, Hitachi Chemical had been considered to be a core unit of the group. Hitachi also suspended the ABWR development by its British subsidiary Horizon Nuclear Power as it did not provide an adequate "economic rationality as a private enterprise" to proceed.

In October 2019, Honda was reported to be in talks with Hitachi to merge their affiliated automotive parts businesses totalling four companies, Showa, Nissin and Keihin of the former and the latter's Hitachi Automotive Systems, creating a components "mega supplier" with almost $17 billion in annual sales, the second largest among the Japanese car parts companies. Hitachi retained the control of the new company with a 67 percent stake. In January 2021, the new company Hitachi Astemo has been incorporated.

In September 2020, Hitachi pulled the plug on plans to create nuclear power plants in Gloucestershire and Wales due to issues with funding due to the impact of COVID-19. In the same month, Hitachi Capital agreed to be bought by its second-largest shareholder, business partner, and former rival Mitsubishi UFJ Lease who started to invest in the Hitachi subsidiary in 2016.

In November 2020, it announced that Hitachi Metals and Hitachi Construction Machinery, both being some of the last remaining listed subsidiaries, will likely be detached from the group according to the restructuring plan. In December, Hitachi sold a 60% stake in its overseas home appliance business to Turkish Arcelik for US$300 million.

Hitachi Consulting, the international management and technology consulting subsidiary with headquarters in Dallas, Texas, was integrated with Hitachi Vantara in 2019.

Among other things, Hitachi Metals supplies materials for aircraft engines and fuselage components (e.g. landing gear), along with finished components for same and other aerospace applications. It also provides materials, components and tools for the automotive and electronics industries. Among the Hitachi Metals facilities is Hitachi Metal Yasugi Works or Tatara Works, one of the oldest furnaces in Japan, famously featured as a main backdrop in Princess Mononoke, a Japanese animation film set in the Muromachi period.

As of September 2020, Hitachi Metals is set to be divested as part of the long-term restructuring plan being executed by the Hitachi Group. 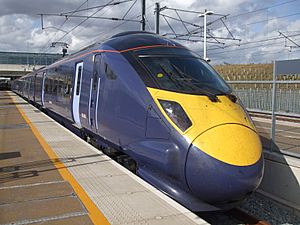 Hitachi Rail is the rolling stock manufacturing division of Hitachi.

Hitachi markets a general-purpose train known as the "A-train", which uses double-skin, friction-stir-welded aluminium body construction. Hitachi's products have included the designing and manufacturing of many Shinkansen models, including the N700 Series Shinkansen.

In July 2020, Hitachi signed an exclusive agreement with Hyperdrive, a UK-based lithium-ion battery company, to bring battery-powered trains to the country.

All content from Kiddle encyclopedia articles (including the article images and facts) can be freely used under Attribution-ShareAlike license, unless stated otherwise. Cite this article:
Hitachi Facts for Kids. Kiddle Encyclopedia.