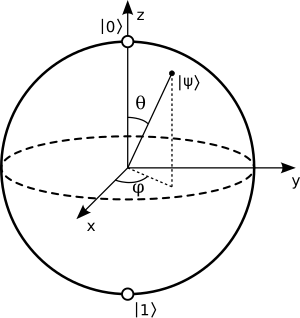 The Bloch sphere is a representation of a qubit, the fundamental building block of quantum computers. 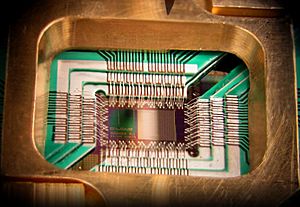 Photograph of a chip constructed by D-Wave Systems Inc., mounted and wire-bonded in a sample holder. The D-Wave processor is designed to use 128 superconducting logic elements that exhibit controllable and tunable coupling to perform operations.

The idea of quantum computing is still very new. Experiments have been done. In these, a very small number of operations were done on qubits (quantum bit). Both practical and theoretical research continues with interest, and many national government and military funding agencies support quantum computing research to develop quantum computers for both civilian and military purposes, such as cryptanalysis.

All content from Kiddle encyclopedia articles (including the article images and facts) can be freely used under Attribution-ShareAlike license, unless stated otherwise. Cite this article:
Quantum computer Facts for Kids. Kiddle Encyclopedia.