Kids Encyclopedia Facts
This page is about the city in Kentucky. For the geological formation in Massachusetts, see Horse Caves. 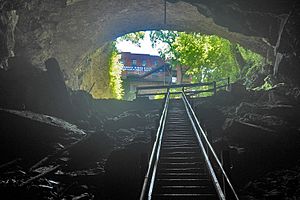 View from inside Hidden River Cave at the American Cave Museum in Horse Cave, Kentucky

Horse Cave is a home rule-class city in Hart County, Kentucky, United States. Randall Curry currently serves as Mayor of the city and is assisted by a City Council that is composed of six members. According to Census data, the population of Horse Cave was 2,311 in 2010.

The town was settled by Maj. Albert Anderson in the 1840s. The landowner donated land for an L&N station in 1858 on the provision that it be named after nearby Horse Cave. The community around the station developed quickly, so that a post office was erected in 1860 and the city was formally incorporated by the state assembly in 1864.

The cave for which the city is named is located on the south side of Main Street. Various explanations are given for its unusual name. One is that Native Americans or outlaws hid horses in the cave; another is that an early carriage may have lost a horse when it fell into the opening by accident; a third reason involves the 19th-century use of "horse" as slang for anything big or huge, related to a similar use of the Swedish hoss. The cave has also been known as Hidden River Cave, for an underground stream located inside. That stream was used to power a dynamo and, for a while in the late 19th century, Horse Cave was the only city in Kentucky apart from Louisville and Ashland to have electric lights.

The town changed its name to Caverna in 1869 but the inability to change the name of the railroad station prompted the community to reconsider and restore the name Horse Cave in 1879. Owing to its early rail connection, Horse Cave was a major center of agricultural commerce for Hart, Metcalfe, Green, and Barren counties since the 1870s. Tobacco warehouses provided the majority of the income.

Since the 1970s, some factories have relocated to the area including: Dart Container Corporation, T Marzetti Company, and Sister Schubert's Bakery. Tourist attractions include Kentucky Down Under/Kentucky Caverns, Hidden River Cave/American Cave Museum, and the nearby Mammoth Cave National Park. Civil War Days are an annual tourist event, during which time parades down Main Street and reenactments of the Battle of Rowlett's Station between Horse Cave and Munfordville are staged. A local theatre formerly known as the Horse Cave Theatre and/or the Kentucky Repertory Theatre once operated in Horse Cave but is no longer in business.

According to the United States Census Bureau, the city has a total area of 3.0 square miles (7.8 km2), all land.

A large bamboo research station is north of Horse Cave on U.S. Route 31W in Bonnieville. It is said to contain the largest collection of bamboos in the state of Kentucky.

There were 977 households out of which 28.0% had children under the age of 18 living with them, 40.2% were married couples living together, 18.2% had a female householder with no husband present, and 38.4% were non-families. 34.8% of all households were made up of individuals and 16.8% had someone living alone who was 65 years of age or older. The average household size was 2.21 and the average family size was 2.84.

All content from Kiddle encyclopedia articles (including the article images and facts) can be freely used under Attribution-ShareAlike license, unless stated otherwise. Cite this article:
Horse Cave, Kentucky Facts for Kids. Kiddle Encyclopedia.