Cave City is a home rule-class city in Barren County, Kentucky, in the United States. The population was 2,240 at the 2010 census. It is part of the Glasgow Micropolitan Statistical Area.

The site upon which Cave City stands was acquired in October 1853 by the Knob City Land Company, composed of Messrs. Graham, Quigly, Adams, and Hopson, all of whom were from Louisville and envisioned the place as a resort town due to its proximity to Mammoth Cave. The town was incorporated in 1866.

The Knob City Land Company surveyed and laid out the town, the main streets being 80 feet (24 m) wide, and began to sell lots about the same time as the Louisville & Nashville Railroad came through Barren County. The first train arrived at Cave City in 1859. The town took its name from a cave within the town limits, not nearby Mammoth Cave. A small creek ran through the cave which the L&N Railroad used as a source of water. The creek was called "Sink Hole Spring" and was the only water supply for the town at the time. The Cave City post office was established in January 1860 and Beverly Daniel Curd appointed the first post-master. He moved the post office established in 1850 at Woodland (about a mile north) to Cave City.

The first business in Cave City was built and operated by postmaster Curd and his brother, Havilah Price Curd. Their store was located at the corner of First and Kirtley (now Broadway) streets. The second person to open a business in Cave City and to build the first residence was Judge C. Roberts. 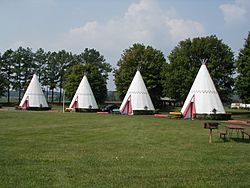 The Wigwam Village Motel, built in 1937, is one of Cave City's unique attractions and located on the Historic National Register. It was the 3rd of 7 Wigwam Villages constructed across America, and one of only 3 now in existence.

There were 844 households, out of which 26.1% had children under the age of 18 living with them, 47.7% were married couples living together, 12.9% had a female householder with no husband present, and 35.5% were non-families. 32.7% of all households were made up of individuals, and 17.9% had someone living alone who was 65 years of age or older. The average household size was 2.23 and the average family size was 2.79.

Cave City is governed by a mayor and an elected city council. The current mayor (as of 2016[update]) is Dwayne Hatcher. Previous mayor Bob Hunt attracted attention by casting the tie-breaking vote against an ordinance considered by the council, which would have banned the use of tobacco in public places. (The region around Cave City is one of the largest tobacco-producing areas in the world.)

On November 8, 2005, Cave City voters passed a Liquor-by-the-Drink referendum that for the first time in over 50 years allowed alcohol to be served in restaurants that met certain qualifications. The Sahara Steakhouse was the first restaurant in Cave City to obtain a license to sell alcoholic beverages in the city limits a year after it was made legal. El Mazatlan, a Mexican restaurant, now has a license as well. Sahara Steakhouse has since ceased alcohol sales due to the excessive cost of liability insurance.

Cave City's main industry is tourism, thanks to its proximity to Mammoth Cave National Park. A number of motels and restaurants are located at the Exit 53 interchange of Interstate 65 and state routes 70 and 90, which cater to tourists visiting the area. The city operates one of south-central Kentucky's first convention center hosting over 40,000 attendees per year, with an annual economic impact over $435,000 in lodging, restaurant and attraction revenue. Cave City has long been host to Mammoth Cave visitors; in the era of passenger rail travel, trains of the Louisville and Nashville Railroad would discharge tourists there, who would then be shuttled to the cave.

Aside from tourism, the city's economy is largely retail focusing on antiques and consignment stores.

All content from Kiddle encyclopedia articles (including the article images and facts) can be freely used under Attribution-ShareAlike license, unless stated otherwise. Cite this article:
Cave City, Kentucky Facts for Kids. Kiddle Encyclopedia.