The Pioneer Playhouse, located in Danville, Kentucky, is the oldest outdoor theater in the state of Kentucky. 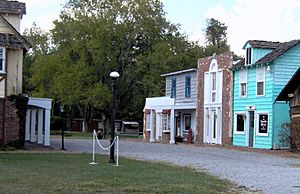 The Pioneer Playhouse was built by Col. Eben C. Henson who established the outdoor theater in 1950. Notable alumni actors include John Travolta, Lee Majors, then known as Harvey Yeary, and Jim Varney. In 1962, Pioneer Playhouse became the first theater in the nation to be accorded the legal status of State Theater by act of Legislation.

Since Henson's death in 2004 the theater has been run by Henson's widow, Charlotte. Her daughter Holly served as artistic director until her death in 2012. Robby Henson, her son, directs at least one play at the theater every summer.

All content from Kiddle encyclopedia articles (including the article images and facts) can be freely used under Attribution-ShareAlike license, unless stated otherwise. Cite this article:
Pioneer Playhouse Facts for Kids. Kiddle Encyclopedia.