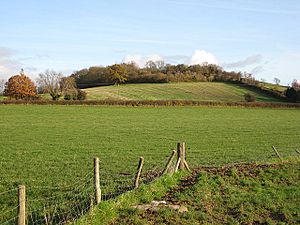 Sutton Walls Hillfort is an elongated ovoid Iron Age Hill fort located four miles north of the city of Hereford, England. It was added to the Sites and Monuments Record in 1988.

The Sutton Walls hillfort dates back to the Iron Age. By 100 BC defenses began to be constructed in the form of a V shaped ditch and an internal bank. The ditch and groundwork were then reinforced by revetting the banks with timber and stone. The reason for such work being done was because a larger community was establishing itself on top of the fort. The people in the settlement lived in wood and stone huts which were situated within the newly constructed defenses. These very defenses were strengthened around the year 25 AD, in the form of a large wooden perimeter wall enclosing the settlement atop the fort.

Archaeological digs have revealed that in around 48 AD, Sutton Walls was attacked by the Romans under the leadership of Ostorius Scapula and 24 of its inhabitants were slain and their bodies were thrown into the ditch. It is clear from examining the wounds of the skeletons of victims excavated that they were killed in such a conflict. After the fort was conquered and its people either banished or put to the sword, the Romans themselves occupied it and did so till roughly the 3rd century. In this time the Romans greatly strengthened the fort's defenses likely constructing a larger and more resilient perimeter wall to establish superiority over the local land and its people.

The fort is also regarded by many as being the location of the palace of Offa of Mercia. According to the Anglo-Saxon Chronicle it was at Sutton Walls where Offa arranged Æthelberht II of East Anglia to be murdered in 794. Mediaeval sources tell how he was taken captive whilst visiting his future Mercian bride Ælfthyth and was then murdered and buried. In Richard of Cirencester's account of the murder, which cannot be substantiated, Offa's evil queen Cynethryth poisoned her husband's mind until he agreed to have his guest killed. Æthelberht was then bound and executed by a certain Grimbert. Posthumously Æthelberht was canonised and became the focus of cults in East Anglia and at Hereford, where the shrine of the saintly king once existed.

All content from Kiddle encyclopedia articles (including the article images and facts) can be freely used under Attribution-ShareAlike license, unless stated otherwise. Cite this article:
Sutton Walls Hill Fort Facts for Kids. Kiddle Encyclopedia.