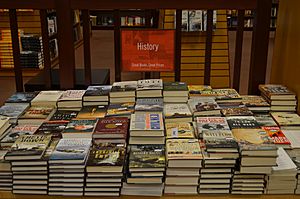 History books in a bookstore

People can learn about the past by talking to people who remember things that happened in the past. This is called oral history. When people who had been slaves and American Civil War survivors got old, some historians recorded everything that they said, so that history would not be lost.

All content from Kiddle encyclopedia articles (including the article images and facts) can be freely used under Attribution-ShareAlike license, unless stated otherwise. Cite this article:
History Facts for Kids. Kiddle Encyclopedia.