Kington is 2.0 miles (3.2 km) from the border with Wales and, despite being on the western side of Offa's Dyke, has been English for over a thousand years. The town is in the shadow of Hergest Ridge, and on the River Arrow, where it is crossed by the A44 road. It is 19 miles (31 km) north-west of Hereford, the county town. Nearby towns include Presteigne, Builth Wells, Knighton and Leominster. The centre of the town is situated at 522 feet (159 m) above sea level. The civil parish covers an area of 860 acres (350 ha).

Kington may have derived from King's-ton, being Anglo-Saxon for "King's Town", similar to other nearby towns such as Presteigne meaning "Priest's Town" and Knighton being "Knight's Town".

Kington is to the west of Offa's Dyke so presumably this land was Welsh in the 8th century AD. The land was held by Anglo-Saxons in 1066, but devastated. After the Norman Conquest Kington then passed to the Crown on the downfall of Roger de Breteuil, 2nd Earl of Hereford in 1075.. 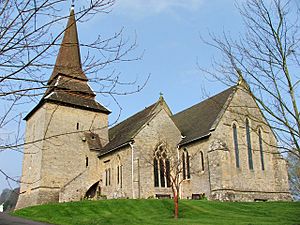 ‘Chingtune' was recorded in the Domesday Book in 1086, the name meaning Kings Town or Manor, high on the hill above the town where St. Mary's Church now stands. The new Kington, called Kyneton in the Fields, was laid out between 1175 and 1230 on land bordering the River Arrow and possibly designated as part of the Saxon open field system.

Situated on the direct route the drovers took from Hergest Ridge and with eight annual fairs, Kington grew in importance as a market town and there is still a thriving livestock market on Thursdays. The town retains the medieval grid pattern of streets and back lanes.

In the chapel of St. Mary's Church, there is the alabaster tomb of Sir Thomas Vaughan of nearby Hergest Court, slain at the Battle of Banbury 1469, and his wife, Elen Gethin. The ghost of Sir Thomas, and also that of the Black Dog of Hergest are said to haunt the area around Hergest Ridge. The Black Dog's sighting reputedly presages death. It is also rumoured to have been the prototype for The Hound of the Baskervilles as Conan Doyle is known to have stayed at nearby Hergest Hall shortly before he wrote the novel.

As with the rest of the UK, Kington benefits from a maritime climate, with limited seasonal temperature ranges, and generally moderate rainfall throughout the year. The nearest met office weather station is Lyonshall, around 2.5 miles (4.0 km) to the east of the town.

The A44 road heads around the town on a bypass; it previously went through the town centre.

Bus services run to Newtown, Powys, Llandridnod Wells, Knighton, Presteigne, Leominster and Hereford. The town has its own bus company, Sargeants Brothers, which was founded in the 1920s, and today provides bus services to Hereford and Mid Wales, though is no longer run by the brothers but their sons. Their bus depot is on Mill Street.

The Kington Tramway opened in 1820 and ran until taken over by the railways.

The Leominster and Kington Railway received royal assent in July 1854, and the 13 miles and 25 chain length opened to Kington in August 1857. Leased to the Great Western Railway from 1862, it was later amalgamated with it. When the Kington and Eardisley Railway replaced the tramway in 1875, it built a new through station at Kington, which it jointly owned with the Leominster and Kington Railway. The old station, slightly to the south, became the goods depot.

Traffic rose during World War II, with the US Army hospital camp at Hergest. Decline set in after the war, and it closed to passengers on 5 February 1955. Freight traffic ceased in 1964, after which the track was taken up and the line abandoned.

Today the nearest station is Knighton on the Heart of Wales Line, though Leominster is quicker to drive to and has more frequent services, being on the Welsh Marches Line. Bus services mostly connect with Hereford railway station, as well with Llandrindod railway station.

Shobdon Aerodrome is located close to the town. 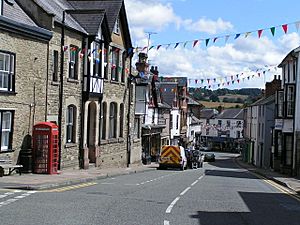 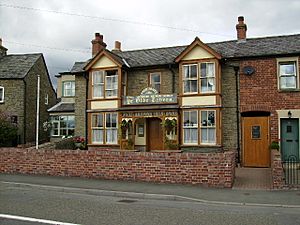 Kington Museum is open April to September inclusive, and is located on Mill Street in the town centre. Near the town is Hergest Croft Gardens, part of the Hergest Estate, which is open to the public March to October. In June, for several weeks, is the annual Kington Festival in the town.

The Burton Hotel is a relatively large hotel and health centre, situated on Mill Street. The town also has a Youth Hostel, situated on Victoria Road, which is open from late March to late October.

Kington has been twinned with the commune of Marines in northern France since 1979. The two places are of a similar population. In Marines there is a residential side-street called "Place Kington", whilst in Kington there is a covered space by the market hall called "Place-de-Marines".

Sue Gee's 2004 novel The Mysteries of Glass is set in and around Kington and Lyonshall in 1860/61 and includes references to many local landmarks.

All content from Kiddle encyclopedia articles (including the article images and facts) can be freely used under Attribution-ShareAlike license, unless stated otherwise. Cite this article:
Kington, Herefordshire Facts for Kids. Kiddle Encyclopedia.