The Church of St Mary, or St. Mary the Virgin Church, is Grade I listed church building at Kington, Herefordshire, England.

The church was established c. 1300, but is much-altered. It has a 12th-century tower, originally free-standing, and included in the church when the latter was extended in the 13th century. A double broach spire was added in the 18th century. The tower houses a six-bell ring. Five were made by Rudhall of Gloucester between 1736 and 1739, including the tenor, which weighs 11 long cwt 23 lb (1,255 lb or 569 kg) and is in the key of F-sharp. The other bell was made by William Evans of Chepstow in 1764. The bells were refurbished in 1978 by the Whitechapel Bell Foundry. The church also has an organ made by J. W. Walker & Sons Ltd, installed in the North chancel chamber in 1883 and improved and refurbished by Henry Willis & Sons in 1959. 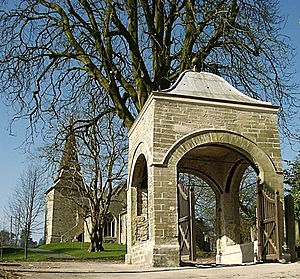 The lychgate is made from brick.

Inside the church is an alabaster monument to Sir Thomas Vaughan (died 1469 at the Battle of Edgecote Moor) and his wife Elen Gethin.

The church was Grade I listed in October 1953, giving it legal protection from unauthorised alteration or demolition. It is part of the Diocese of Hereford and is one of five (three in England, two in Wales) that are jointly administered as the "Kington Parishes"'.

Opposite the church is the original 17th-century building of Lady Hawkins' School, now in use as a private residence.

All content from Kiddle encyclopedia articles (including the article images and facts) can be freely used under Attribution-ShareAlike license, unless stated otherwise. Cite this article:
Church of St Mary, Kington Facts for Kids. Kiddle Encyclopedia.