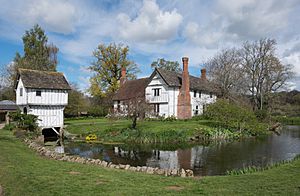 The Brockhampton Estate is a farmed estate in Herefordshire, England, which is owned by the National Trust.

The Brockhampton Estate is located on the edge of Bringsty Common near the town of Bromyard.

The main attraction of the Brockhampton Estate is Lower Brockhampton, a timber framed manor house that dates back to the late 14th century. The manor house is surrounded by a moat and is entered by a newly restored gatehouse at the front of the house.

In 2010, the National Trust undertook a major restoration project to the house using traditional wattle and daub building methods.

The Brockhampton Estate was bequeathed to the National Trust in 1946 by Colonel John Lutley, in whose family it had been for more than twenty generations, although the name of the family had changed several times through marriage.

The site of the medieval village of Studmarsh is thought to be located in the estate. In 2012, an archaeological dig unearthed the foundations of two buildings that may have been part of the village.

All content from Kiddle encyclopedia articles (including the article images and facts) can be freely used under Attribution-ShareAlike license, unless stated otherwise. Cite this article:
Brockhampton Estate Facts for Kids. Kiddle Encyclopedia.