Ross-on-Wye (Welsh: Rhosan ar Wy) is a small market town with a population of 9,574 (according to the 2011 census), in south eastern Herefordshire, England, located on the River Wye, and on the northern edge of the Forest of Dean. 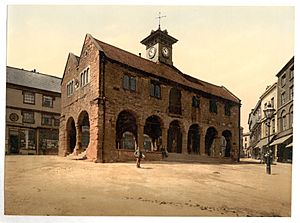 The Market House in 1890 (photochrom)

Ross-on-Wye was the birthplace of the British tourist industry. In 1745, the rector, Dr John Egerton, started taking friends on boat trips down the valley from his rectory at Ross. The Wye Valley's attraction was its river scenery, its precipitous landscapes, and its castles and abbeys, which were accessible to seekers of the "Picturesque". In 1782, William Gilpin's book "Observations on the River Wye" was published, the first illustrated tour guide to be published in Britain. Once it was published, demand grew so much that by 1808 there were eight boats making regular excursions down the Wye, most of them hired from inns in Ross and Monmouth. By 1850 more than 20 visitors had published their own accounts of the Wye Tour, and the area was established as a tourist area. 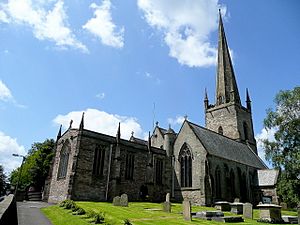 The 700-year-old parish church of St. Mary's The church holds several distinctive tombs, one of which – that of a certain William Rudhall (d.1530) – is one of the last great alabaster sculptures from the specialist masons of Nottingham, whose work was prized across medieval Europe. Rudhall was responsible for the repair of the almshouses, situated to the north west of the church, in 1575. Another tomb is of John Kyrle, a prominent figure in 18th century Ross, whose name is now given to the town's secondary school and after whom one of the town's notable inns, The Man Of Ross, is also named. 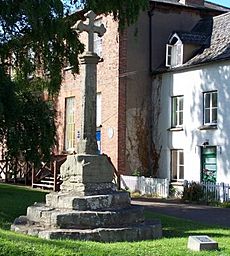 The Plague Cross, also known as the Corpse Cross, was erected in the church yard of St. Mary's church in 1637 as a memorial to 315 people who died in the town of the plague in 1637. They were buried nearby in a plague pit, at night and without coffins. By 1896, the cross had fallen into disrepair and the top of the cross was missing. It was later restored to its former state.

The Prospect was created by John Kyrle and offers superb views over the Wye and to the Welsh mountains. The land was rented by John Kyrle from the Marquess of Bath in 1696 and turned into a garden and walking area. In 2008, following heavy rain, Roman remains were discovered and excavated under the site. It now contains trees (dedicated to local people), the V.E. Day Beacon and the War Memorial. 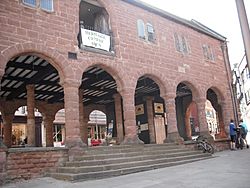 The town is known for its independent shops, picturesque streets and market square with its market hall.

Regular Thursday and Saturday markets are held at the red sandstone in the town centre, which was built between 1650 and 1654 replacing the older, probably wooden Booth Hall. The upper storey of the Market House now houses a Visitor Centre.

The town has not had a cinema since "The Roxy" in Broad Street closed its doors in 1985. The cinema site was purchased by Gateway Supermarkets for development.

Opposite the church, The Prospect is a public garden offering a view of the famous horseshoe bend in the River Wye, as well as views as far as the Black Mountains. The ruins of Wilton Castle, which lie to the west of the town, have now been restored and are open to visitors. The town has a number of sculptures created by Walenty Pytel, the left bank of the River Wye shows two of these. Despite the commonly held belief that both depict swans, one in fact shows ducks.

Most local government functions are vested in Herefordshire Council, the unitary authority covering the county. Ross Town Council, which consists of 18 Councillors (six elected from each of three wards, Ross North, West and East), has the statutory responsibilities of a parish council The Mayor is Councillor Colin Gray. 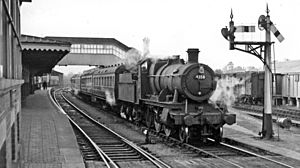 The former Ross-on-Wye railway station was a junction railway station on the Hereford, Ross and Gloucester Railway constructed to the north of the town. It was the terminus of the Ross and Monmouth Railway, which joined the Hereford, Ross and Gloucester just south of the station. Opened on 1 June 1855, on 29 July 1862 the line was amalgamated with the Great Western Railway, and in 1869 converted from broad gauge to standard gauge in a five-day period. A line to Tewkesbury was authorised by parliament in 1856, but was never built.

Closed under the Beeching Axe, the lines to Ross closed in stages, with the final closure in 1964. The brick built station building has been demolished and the site redeveloped into an industrial estate, on which the brick built goods and engine sheds still stand.

Today, although the nearest railway station is Ledbury on the Cotswold Line, Gloucester has a much better bus connection with Ross, and is a major interchange on the national rail network.

To the east of town is the end of the M50 "Ross Motorway" spur from the M5 motorway which links the area to the UK motorway network.

As with the rest of the British Isles, Ross-on-Wye experiences a maritime climate with cool summers and mild winters. A Met Office weather station provides long term climate data for the town.

All content from Kiddle encyclopedia articles (including the article images and facts) can be freely used under Attribution-ShareAlike license, unless stated otherwise. Cite this article:
Ross-on-Wye Facts for Kids. Kiddle Encyclopedia.