Kids Encyclopedia Facts
Not to be confused with Black Mountain (range). 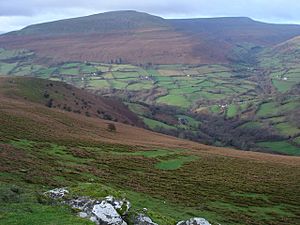 The Black Mountains (Welsh: Y Mynyddoedd Duon) are a group of hills spread across parts of Powys and Monmouthshire in southeast Wales, and extending across the England–Wales border into Herefordshire. They are the easternmost of the four ranges of hills that comprise the Brecon Beacons National Park, and are frequently confused with the westernmost, which is known as the Black Mountain. The Black Mountains may be roughly defined as those hills contained within a triangle defined by the towns of Abergavenny in the southeast, Hay-on-Wye in the north and the village of Llangors in the west. Other 'gateway' towns to the Black Mountains include Talgarth and Crickhowell. The range of hills is well known to walkers and ramblers for the ease of access and views from the many ridge trails, such as that on the Black Hill (Herefordshire) at the eastern edge of the massif.

In his description of a Blak Montayne, the antiquarian John Leland refers to a massif extending between Carmarthen and Monmouth i.e. what is now considered to be the Brecon Beacons in the wider modern sense of that term, thus including the Black Mountain far to the west and the intervening high ground. There is a suggestion too that the names Hatterrall Hill and Mynydd y Gader may also once have been used to apply to the entire range of the Black Mountains though the former later became confined to the vicinity of its eastern ridge. The latter is now recognised in Pen y Gader-fawr (Pen y Gadair Fawr) and Gader Fawr (Gadair Fawr); names applied to the hill at SO 229288. Cadair, mutated to 'gadair' and anglicised as 'gader', means 'seat' or 'chair' in Welsh. 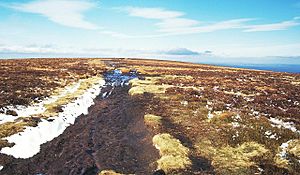 The summit of Black Mountain crossed by the Offa's Dyke Path 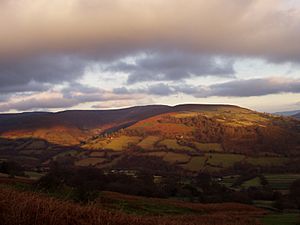 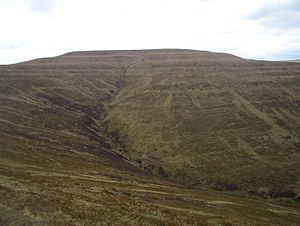 Outlying summits, all of which are classed as Marilyns, include the Sugar Loaf (Welsh: Pen-y-Fal), Mynydd Troed and Mynydd Llangorse. The lower and separate hills of Allt yr Esgair, Myarth, Bryn Arw and Ysgyryd Fawr (also known as 'The Skirrid', Skyrrid or 'Holy Mountain') are scattered along the southern fringe of the Black Mountains.

See this layered sandstone in the short mountain grass. Place your right hand on it, palm downward. See where the summer sun rises and where it stands at noon. Direct your index finger midway between them. Spread your fingers, not widely. You now hold this place in your hand.

This is the hand of the Black Mountains, the shape first learned. Your thumb is Crib y Gath. Your first finger is Curum and Hateral. Your second finger is Ffawyddog, with Tal y Cefn and Bal Mawr at its knuckles. Your third finger is Gadair Fawr. Your outside finger is Allt Mawr, from Llysiau to Cerrig Calch and its nail is Crug Hywel. On the high plateau of the back of your hand are Twyn y Llech and Twmpa, Rhos Dirion, Waun Fach and Y Das. You hold their shapes and their names.

The Black Mountains are composed almost exclusively of rocks assigned to the Old Red Sandstone and dating from the Devonian period. This thick sedimentary sequence comprises sandstones, mudstones, siltstones and numerous thin limestones. The exception is the summit area of Pen Cerrig-calch where a thin sequence of Carboniferous rocks occur, an outlier of the more extensive outcrop to the south of the Usk valley. The lower slopes of these hills are formed from the mudstone-rich St Maughans beds at the top of which lies a calcrete - a discontinuous limestone band known as the Ffynnon Limestone. Above this are the sandstone-dominated Senni Beds which form the upper reaches of much of the range. Higher again are the Brownstones which form the summit areas of the central and southern parts of the range.

The Old Red Sandstone extends back into the late Silurian period and forward into the earliest part of the Carboniferous period. The body of rock, or facies, is dominated by alluvial sediments and conglomerates at its base, and progresses to a combination of dunes, lakes and river sediments. The familiar red colour of these rocks arises from the presence of iron oxide but not all the Old Red Sandstone is red or sandstone — the sequence also includes conglomerates, mudstones, siltstones and thin limestones and colours can range from grey and green through red to purple. 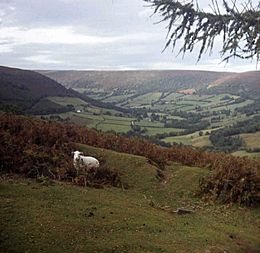 View up the Vale of Ewyas 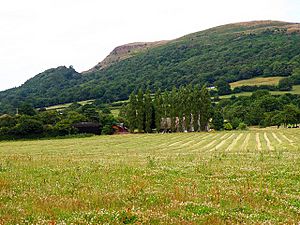 The large landslip at the north end of the Skirrid

The area lay at the margins of the British ice-sheet during the ice ages; these hills were shaped by ice from a source in mid-Wales rather than generating any major glaciers of their own. Non-local rock fragments within the glacial till show that Wye valley ice penetrated the Rhiangoll valley from the north, moving over the low col at Pengenffordd. No such evidence has been found in the Vale of Ewyas though the profile of this valley strongly suggests the presence of a major glacier. The valleys of the Grwyne Fawr and Grwyne Fechan were probably ice-free during the last ice age. One result of the over-steepening of valley sides by glacial action is the suite of landslips affecting the range, notably in the Vale of Ewyas. The most impressive of all is that at Darren and Cwmyoy. Another impressive set of landslip forms can be seen at Black Darren and Red Darren ('Darren' signifies 'edge' in Welsh) on the eastern side of the Hatterrall ridge west of Longtown. Another, at the northern end of the Skirrid just to the east of Abergavenny, is perhaps most commonly seen, and the section of the mountain shows the landslip prominently when seen from the north, but is also visible from the south such is the scale of the feature.

Scattered around the range are innumerable small quarries, virtually all of which now lie abandoned, once a source of walling and roofing stone for local use. In places the thin Devonian limestones were worked to feed limekilns for the production of lime for agricultural use and in buildings. Old Red Sandstone has also frequently been used in buildings in Herefordshire, Monmouthshire and the former Brecknockshire (now south Powys) of south Wales.

Activities in the Black Mountains

The area is popular for hillwalkers, mountainbikers and horseriders. The Offa's Dyke National Trail runs along the border between England and Wales, whilst both the Beacons Way and the Marches Way also pass through the Black Mountains. The Three Rivers Ride runs along the northern slopes of the massif. The range's great northern escarpment offers excellent opportunities for gliding, hang gliding and paragliding as winds are forced up and over the hills. 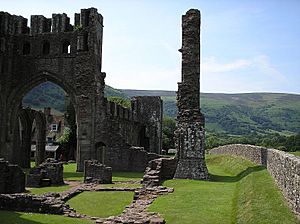 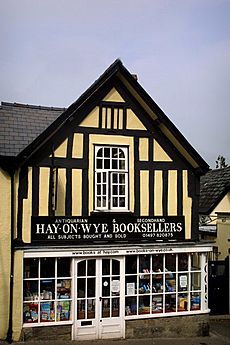 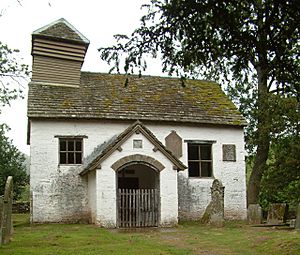 There are several attractive villages and hamlets in this area. The Skirrid Mountain Inn also has a wider reputation, being claimed as the oldest public house in Wales and mentioned in records from AD 1100. Antiquities include Llanthony Priory in the Vale of Ewyas, ruined Craswall Priory, Tretower Castle, Tretower Court, the Iron Age hill fort of Crug Hywel, and the remains of Castell Dinas, an 11th to 13th century castle built on the site of an Iron Age hillfort between Talgarth and Crickhowell. Cwmyoy and Partrishow churches are also worth visiting.
The youth hostel at Capel-y-ffin closed in late 2007. The town of books or Hay-on-Wye lies just to the north. It was the first booktown to be established and there are more than two dozen second-hand bookshops to explore. Some specialise in specific subjects, so there is a wide choice for browsers.

Settlements in and around the Black Mountains include Hay-on-Wye, Llangors, Talgarth, Crickhowell, Cwmdu, each in Powys, Abergavenny in Monmouthshire and Longtown in Herefordshire. Many act as bases for accessing the hills all year round.

The controversial artist and typeface designer Eric Gill lived at Capel-y-ffin between 1924 and 1928. The artist and poet David Jones worked in the area during the same period. The Cultural Marxist Raymond Williams was born here, and draws on the region to frame his analysis of pastoral poetics and development in The Country and the City.

Books set in or around the Black Mountains include:

All content from Kiddle encyclopedia articles (including the article images and facts) can be freely used under Attribution-ShareAlike license, unless stated otherwise. Cite this article:
Black Mountains, Wales Facts for Kids. Kiddle Encyclopedia.